Second Deputy Speaker of Parliament, Alban Kingsford Bagbin, has lamented over government’s budgetary allocation to the Ministry of Works and Housing describing it as ‘next to nothing.’

According to the legislator, the funds allocated to the Ministry is woefully inadequate and will limit the Ministry in the execution of its activities for the coming year.

“The budget allocation to the Ministry is woefully inadequate, it is just 10 per cent of the actual budget needed for the Ministry to work effectively, I sympathise with the Ministry,” he said.

Presenting the committee’s report on the 2020 annual budget estimates of the Ministry, chairman for the parliamentary committee on Works and Housing, Nana Amoakoh indicated that the budgetary allocation will be expended under core expenditure items.

The House, in spite of the concerns raised by the Minority, approved the GH¢ 148 million for the Ministry’s programmes and activities for the 2020 Financial Year. 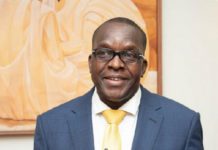