The family of deceased suspect, Francis Azabanga, who was involved in the Ayeduase shooting incident, has accused the police of killing their relative.

The deceased is said to have shot himself, after he had shot 52-year-old Kwame Amoah who attempted to settle a squabble in a road rage.

This comes after the police claimed the suspect shot himself to avoid a mob attack.

“My brother cannot kill himself and put the gun in his pocket; the police shot him,” she cried.

She said all the family is seeking is for the police to come clean so that her brother can rest in peace.

“I will never accept that my brother killed himself; he is a gentleman and will not do anything to hurt anyone,” she added.

Meanwhile, the Azabanga family will meet the police in Kumasi Thursday for the way forward. 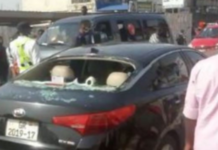