The claims, made by the National Democratic Congress (NDC), suggested that Mr Amoah has, among three other allegations, stolen GH¢ 28.8m.

Responding to the allegations, Mr Amoah said no amount of propaganda and smear campaign against his person will stop him and the New Patriotic Party (NPP) from delivering on its mandate to the good people of Ghana.

He said the allegation of stealing GHS 28.8m is nothing short of a palpable falsehood and propaganda and must be disregarded entirely.

Reacting to the distribution of Isuzu buses to the NPP chairmen, Mr Amoah said the buses were rejected by the selected Ghana Private Road Transport Union offices, and to prevent loss 15 of them were sold to individuals and only two were given to his office and the National Union of Ghana Students.

He also debunked claims that the centre procured the services of an audit firm without going through appropriate procurement process. 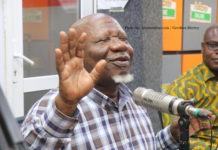