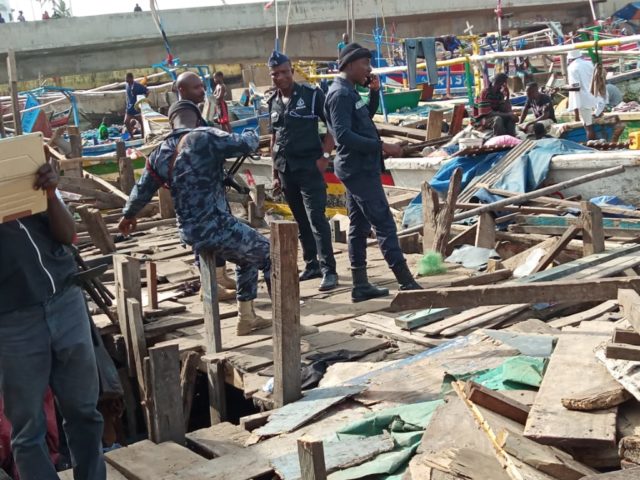 The Paramount Chief of Edina Traditional area in the Central region, Nana Kodwo Conduah (VI) together with the police have raided ghettos to rid his area off criminals.

However, no arrests was made as many took to their heels on seeing the police team arrive at the scene.

READ: Video: Chief Imam prays for Ghana as he turns 100

In an interview on Adom News, Nana Kodwo Conduah bemoaned the drug menace in his area.

He said most youth in the area had become drug addicts and pledged to collaborate with the Police to ensure that all ghettos were destroyed.

“We will not sit down unconcern for our youth to become social misfits”, he stressed.

Nana Kodwo Conduah (VI) admonished the youth to desist from the use and abuse of illicit drugs such as Cannabis, Tramadol, heroin, cocaine.

Also, Police Commander for the Municipality; Superintendent Samuel Entsuah who led the exercise, later told the media that the Municipal Security Council (MUSEC) took the bold decision to flush out criminals to end the constant tormenting of residents in Elmina and its environs by criminals.

He said the places raided, had become very notorious as criminals converged and operated from such ghettos where all forms of narcotic drugs were traded.

“We took a decision to have these ghettos demolished because most criminal activities are traced to those place” he stated.

Supt Entsuah said the raid will be a bi-weekly exercise to completely flush out miscreants.