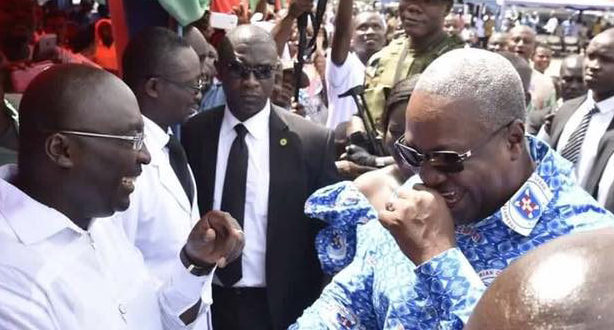 Former
President John Mahama has rebutted what he describes as propaganda by
the Vice President, Dr. Mahamudu Bawumia, saying he has never been
against the Free SHS policy.

He said for someone who implemented Progressively Free SHS for over 350,000 students, he cannot be said to be against free SHS.

Mr Mahama challenged Dr. Mahamudu Bawumia to provide evidence of him ever saying he is against free SHS.

According to him, just like all well-meaning Ghanaians, he believes “free SHS must be made better instead of the ad-hoc implementation we are witnessing under the Akufo-Addo administration.”

Below is the statement

We
have noted yet another propaganda churned out by Vice President Dr.
Mahamudu Bawumia to the effect that HE John Dramani Mahama, the
Flagbearer and Leader of the NDC is against free Senior High School
(SHS) education.

This is false. Dr. Bawumia knows very well, in his heart, that he is not telling the truth and for that matter, he is misrepresenting the views of the former President.

Mr.
Mahama has never been against free SHS and nowhere has he ever said
free SHS is a bad policy. Certainly, the President who implemented
Progressively Free SHS for over 350,000 students cannot be said to be
against free SHS. We challenge Dr. Bawumia to provide evidence of the
former President ever saying he is against free SHS.

Mr.
Mahama, just like all well-meaning Ghanaians, believes free SHS must be
made better instead of the ad-hoc implementation we are witnessing
under the Akufo-Addo administration.

For example, presently the ‘Double Track System’, which keeps some students at home while others are in school studying remains a major worry to students, parents and many Ghanaians who care about the future of the youth of Ghana.

In
addition, the fate of SHS students when they graduate remains a major
concern to many Ghanaians including students, parents, lecturers, Vice
Chancellors among others. Even President Akufo-Addo, himself, has
admitted to the “challenges” and has only asked Ghanaians to see beyond
the “challenges” because every programme has “challenges”.

Over
and above the President, the Finance Minister Ken Ofori Atta has also
had cause to speak to the challenges of the programme. Will Dr. Bawumia
by any stretch of his imagination, suggest that both President
Akufo-Addo and Mr. Ken Ofori Atta are “kicking against” the free SHS
programme?

For emphasis, nowhere has former President Mahama ever said he will abandon the free SHS programme. He has been very consistent in his belief that the surest way to sustain the programme requires:

§ A wider national stakeholder consultation because wisdom does not reside in the heads of a few;

§ Immediate and urgent abolishing of the Double Track System;

§ Structured, new and additional application of funds at all levels of education;

§ Integrated and coherent planning of education at all levels; and

§ Aggressive teacher motivation programmes and infrastructure development among others.

To
this end, we wish to underscore the fact that the National Democratic
Congress (NDC) record on all-inclusive education does not suggest that
we will ever be against any policy that promotes all-inclusiveness in
education. We initiated FCUBE, set up the

GETFund
despite numerous contentions from our opponents began the progressively
free education policy among others. As a result, the GETFund has been
the singular most effective influence on educational expansion and
progress in Ghana. Sadly, for the first time in our history, the future
of the GETFund has been collateralised due to misuse and abuse by the
present government.

Additionally,
the fact that John Mahama has added more to the infrastructure stock of
Senior High Schools than any other government aside Osagyefo Dr. Kwame
Nkrumah is not in dispute. He provided all these infrastructures and
several significant educational deliverables without mortgaging the
GETFund as this government has done.

Therefore,
we wish to advice Dr. Bawumia that subjecting free SHS to emotionally
charged tribal discussions and sentiments will amount to bigotry. Hence,
he must remain civil, circumspect, sensitive and utter words befitting
of his new position as Vice President.

As
leaders, it is important that we do not fall for the emotionally
charged pressure to be virulent without cause, and even if the Vice
President chooses to reduce Ghana’s political discourse to such
invective bigotry, let him at least try to be truthful.

His
Excellency John Dramani Mahama remains committed to free SHS. He will
make it better and secure the future of the youth of Ghana.