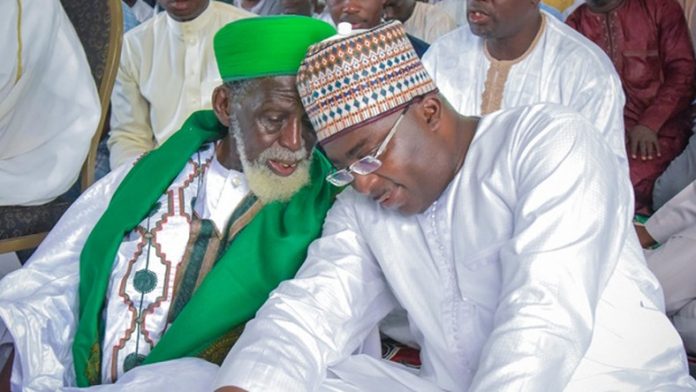 The National Chief Imam, Sheikh Dr Osmanu Nuhu Sharubutu, has turned a century old today, and after 26 years of hailing the highest Muslim religious authority in the country, his message remains simple: to live in peace.

In an exclusive interview with Joy News on Easter Monday, the Chief Imam advocated for people of all religions to congregate, rather than segregate based on differed religious beliefs.

“It is good to have relationships with people from other faiths,” he told Joy News’ Latif Iddrisu. “Allah did not create us to fight. We must interact with each other. That is how we make progress.”

During the interview, the centenarian offered loads of advice for believers and emphasised what the power of good deeds could do to help the country move forward, but he also took a trip down memory lane.

He admitted that he never wanted to become an Imam. Growing up, his goal was to teach.

“I thought becoming an Imam would hinder my work and my father advised me not to take up Imam-ship for the same reason,” he recalled. “But when Allah ordains you, it is your duty to guide the Muslim community.”

He vividly remembers when he started seeing signs from Allah telling him that he was special. Allah was protecting him so much so that not even bed bugs would sting him, even when others were stung on the same bed, he recounts.

“I realised God had a special plan for me,” he added.

“He is no doubt a blessing from God to this country. He epitomises how Prophet Muhammed wanted Muslims to live their lives,” said Vice President Mahamadu Bawumia at the chief Imam’s 100th Birthday Breakfast at Mövenpick Ambassador Hotel in Accra.

“Between Muslims and Christians, there is actually more that unites us than divides us. We worship the same God and the Chief Imam has always been at the forefront of promoting that.”

Also in attendance at the birthday breakfast was the United Nations Special Representative and Head of the United Nations Office for West Africa, Mohammed Ibn Chambas, who stated simply that the Chief Imam “is an icon. He is a champion of religious tolerance and inter-faith dialogue and I have always been an avid admirer of his remarkable qualities.”

But as the world celebrates, a stark reality lingers.

“There
is no laid down structure as to who will succeed him,” said Joy FM’s
Malik Daabu. “It frightens every Muslim and I think he should use his
good will to lay down a structure for someone to take over when he is no
more.”

Sheikh Dr Osmanu Nuhu Sharubutu is the nation’s first Chief Imam and has held the position since 1993. He was born, raised and currently lives at Fadama, a small district in Accra. His ancestors are of Hausa ethnicity from Northern Nigeria.