According to him, the former President, after months in office, was not willing to pay the ex-gratia of MPs due to the country’s ailing economy.

“I will remember in 2009 when we came into office, the country was struggling financially. But the man wasn’t willing to pay after he saw the budget for the ex-gratia.”

Speaking on Adom TV’s Badwam Show, he revealed that the late Mills threatened to vacate his office after a crunch meeting with the MPs over the ex-gratia settlement.

“He told the MPs during a meeting with the MPs that he can’t ignore the plight of Ghanaians, the present economic hardship and release this money.

“And to side with the MPs, its their legal right so they definitely demanded for it but he said ‘if you are forcing me to pay this money then I will take my briefcase and leave the Castle’.”

Mr Chai was full of praise indicating that, “many young ones who were new to Parliament learnt a lot from him.” 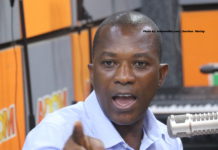 Hot Audio: NDC will reveal cause of Mills’ death soon