A photo intercepted by Adomonline.com has spotted General Mosquito in a funny posture as he receives the shot.

The Chief Scribe was in a steady position while the nurse held on tight unto his left arm.

Mr Nketia is expected to take a second jab in about two months.

The vaccines were delivered to Ghana under the World Health Organisation-led equitable vaccine facility, COVAX platform.

In all, Ghana received 600,000 doses; the first African country to receive COVAX doses.

President Nana Akufo-Addo became the first person to also receive a COVAX jab globally. A second shot is expected in about two months. 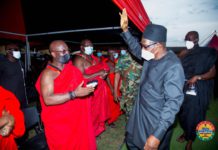