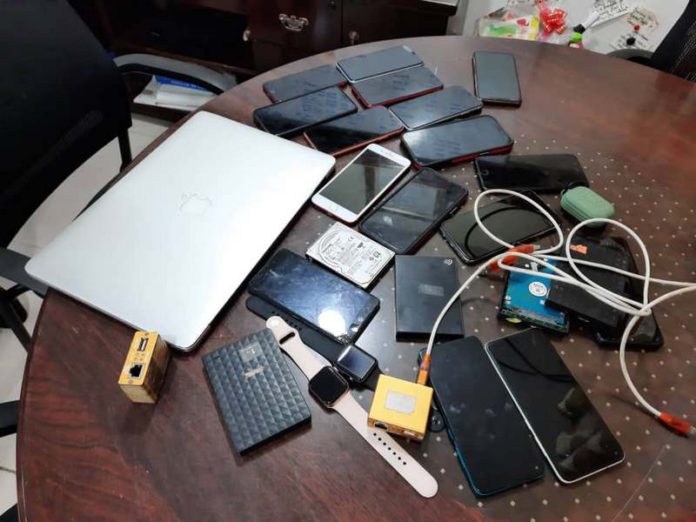 A four-member phone-snatching syndicate has been arrested by the Tema Police on Wednesday, April 21, 2021, at Ashaiman.

The suspects were nabbed after they had snatched an iPhone 12 Pro from a victim at Adenta.

The victim was chatting on the phone as he was seated in the backseat of a vehicle when the bandits snatched the phone.

She said luck ran out of the suspects when the owner tracked the phone to their hideout in Misusokope, a rented apartment at Lebanon Zone 4, Ashaiman, where he met two of the suspects and informed the police.

The suspects include a 22-year-old John Hackman also known as Abeiku, a driver and mechanic by profession; 19-year-old Yaw Antwi, also known as Ogeze, a coconut seller.

The rest are Prince Boadi, known as Venza, 18 years and unemployed, and Jacob Asiamah, also known as King Promise, 25 years and a phone Repairer who unlocks most of the iPhones brought to him by his accomplices and sometimes buys and sells same.

Some of the suspects has admitted their complicity in such criminal activities for some time now and explicitly explained that they usually target unsuspecting victims who fidget with their phones on the street while not paying proper attention to their immediate surroundings.

The arrested suspects have named other accomplices who are being sought by the police to assist in further investigations.

The arrested suspects shall be charged and put before court after investigations.

The Tema Police Command has therefore cautioned mobile phone users to be on their guard while using their phones in public.

The command is urging members of the public who have fallen victim to the activities of phone snatching syndicates to come and identify their phones.