It was a heartbreaking moment as actress Rosemond Brown aka Akuapem Poloo, broke down in tears on live TV.

This was during a press conference on Saturday, April 24, 2021, following her release from the Nsawam prison on Friday.

She was granted the bail at a cost of GH¢80,000 with two sureties, both to be justified.

She teared up while recounting how challenging the short period of her life has been and personal struggles she had to deal with.

Akuapem Poloo on Friday regained her freedom, at least temporarily, after she fully satisfied the bail conditions as set out by the criminal division of the Accra High court.

The convict (appellant) was arrested and arraigned before the Circuit Court, Accra on three (3) counts of offences relating to obscenity contrary to section 280 of Act 29/60 and Domestic Violence contrary of section 1(d) (iii) and (iv) and 3(2) of Act 732.

She sentenced after pleading guilty to the charges against her but the court said, the sentences were to run concurrently,

However, not satisfied with the conviction, the convict/appellant filed a notice of appeal at the High court for determination. 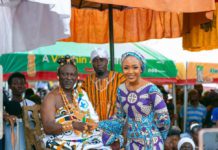 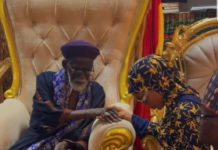