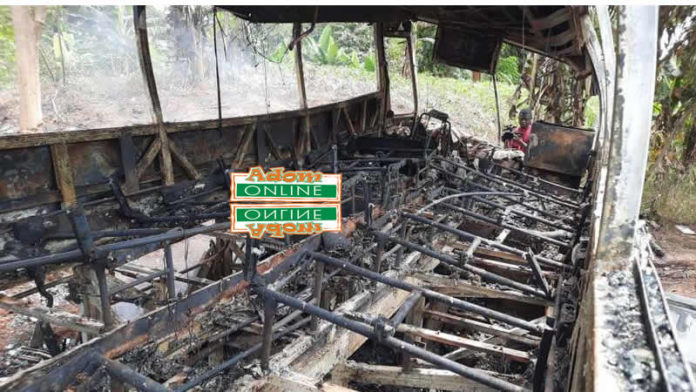 Some family members of the six people who were burnt to death in an accident at Akomadan in the Ashanti Region have decided to bury the ashes.

The move, according to them, is to enable them rest in peace following their sudden demise.

The deceased were part of 37 passengers travelling in a bus from Lawra in the Upper West Region which crashed into an abandoned vehicle at a Police checkpoint.

Some 10 passengers managed to escape through the glass window and 22 others are said to be in critical condition.

This unfortunate incident has brought pain and sorrow to families who lost their loved ones in the accident.

The Director-General of the National Road Safety Authority (NRSA), May Obiri Yeboah, who visited the scene of the accident, said she was heartbroken.

Speaking on Adom FM’s morning show, Dwaso Nsem programme Thursday, she said families of the deceased were collecting the ashes to send back home for burial.

“One person I spoke to told me he could not identify his family member so he is collecting the ashes to go and bury,” she narrated.

The increase in accident cases, the Road Safety boss said is due to non-compliance with road traffic regulations.

She said these unfortunate accidents will be avoidable if the drivers adhere to road traffic regulations.

“This driver killed six people because he failed to stop at the police checkpoint. Why do we do this to ourselves?” the NRSA boss bemoaned.

Ahead of the yuletide, Madam Yeboah appealed to drivers to adhere to speed limits to protect lives and property.