The flagbearer of the National Democratic Congress, John Mahama, during the party’s manifesto launch on Monday, promised free tertiary education for persons with disabilities.

The pro-education policy will also absorb 50 per cent of tuition fees of all tertiary students.

Mr Mahama’s manifesto promise has widely been accepted by students of the various tertiary institutions, particularly students living with disabilities.

Speaking in an interview on Adom FM’s Dwaso Nsem on Tuesday, the Member of Parliament for North Tongu, Samuel Okudzeto Ablakwa, touted the two-day-old launched manifesto as being a manifesto that recognises and addresses the needs of Ghanaians.

Asked by host CJ Forson how much the policy would cost the State if implemented, the legislator noted that fees for tertiary students would first have to be determined by Parliament.

“For now I can’t tell how much the implementation of the policy is going to cost because Parliament has not yet approved tuition fees for tertiary students and so when that is done, then we can make the analysis and see how it’s going to cost,” he said.

Full speech: An engagement with professionals in Ghana on the NDC Peoples’ Manifesto 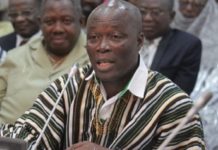