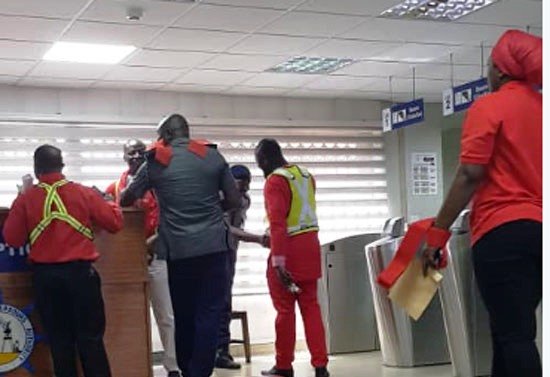 Staff of the Ghana Ports and Harbours Authority (GPHA) will today wear red attire to protest against the Authority’s port expansion agreement with Meridian Ports and Services (MPS).

According to them, the agreement ‘stinks’ due to some unfavourable clauses which will lead to loss of about 4,000 direct and 1,500 indirect jobs.

READ: Just in: Boy, 2, kidnapped and killed by ‘Nigerians’ at Kasoa, mother in coma (Video)

He noted that, clause 3.2 of the agreement notes that GPHA cannot handle vessels carrying more than 200 containers. Any ship loaded with those containers would go to the new terminal three.

Also, Mr Young reveled that the GPHA under the concession is expected to pay MPS 30 percent of proceeds from container handling at the terminal which is currently in the domain of MPS – a situation he described as dire.

He blamed inaction of government for the lackadaisical attitude of the Minister of Transport, Mr Kwaku Ofori Asiamah.

Mr Young explained that, the Minister after a committee was formed by Vice President, Dr Mahamadu Bawumia came out with its findings, has failed to act.

“We want President Akufo-Addo to force the Transport Minister to resign because he has failed us. All his talks about is job loss and how MPS will absorb just 100 of us,” he fumed.

READ: I would have deported Aisha Huang – Former Lands Minister

Mr Young said the wearing of red attires is just one of many actions to be taken if the MPS deal is not reviewed.

He hinted of a massive demonstration in all ports in the country if the government fails to listen to their plea.

The MPS has already received a large number of gantry cranes with the last 27 coming into the country on February 1, 2019 ahead of unit testing and commissioning and subsequent takeoff.

Meridian Port Services, under the contract, would not pay any royalty to the GPHA for operating terminal three though it would handle almost all the containers that come to the Tema Port.