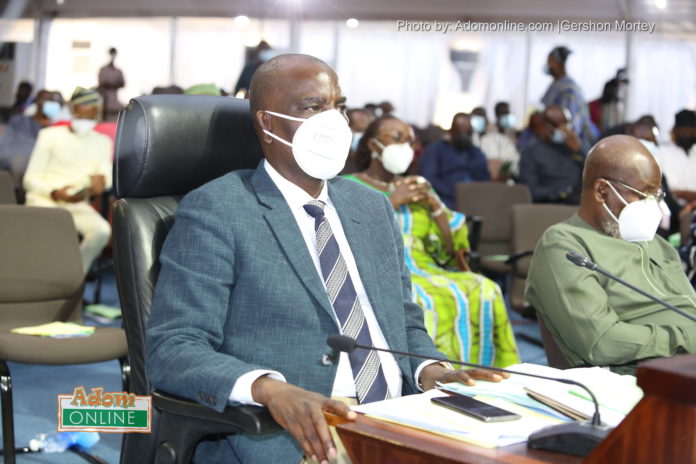 Deputy Majority Leader has expressed his surprise that Minority Leader, Haruna Iddrisu, has not abdicated the Minority Leader position after a leading National Democratic Congress (NDC) member launched a scathing attack on the party’s leadership in Parliament.

According to Alexander Afenyo-Markin, attempts by the NDC hierarchy to coerce Minority MPs to take decisions against their conscience weaken the party’s front in Parliament.

He said, “…in parliamentary politics, express your views but don’t hold hostage the fortunes of the government. They are running the state. Let them go on but express your disagreement. The NDC machinery in Parliament is becoming so weak. If I were to be Haruna Iddrisu, I will simply resign and leave the scene for them.”

Earlier, NDC National Communications Officer, Sammy Gyamfi, in a Facebook post accused the Speaker, Mr Iddrisu and a host of others of failing to reject three of President Nana Akufo-Addo’s ministerial nominees whom they had earlier raised red flags about during the vetting by the Appointments Committee.

Although the Minority Leader refuted the claims, he urged party foot-soldiers to be measured in their utterances.

But Mr Afenyo-Markin said the Tamale South Member of Parliament (MP) should have resigned to save his conscience and reputation.

According to him, the pressure from the NDC extremists has forced their legislators to fight against the government’s proposed programmes and policies brought before Parliament for approval.

The Effutu MP said that “the extremists operating at their party headquarters are the people destroying the strength…The NDC machinery in Parliament is becoming so weak. Now they are confused because what will the footsoldiers say, how will they react?”

He was also of the view that the Minority Caucus has lost control of their supporters who now tend to dictate to the party’s leadership.

The Deputy Majority Leader believes the situation has plunged the Minority Caucus into a crisis and if not checked; may affect parliamentary business.

But Bawku Central MP, Mahama Ayariga, disagreed with claims that the NDC Caucus has lost control of its base. He said the footsoldiers and the party executives have a legitimate case to hold their elected representatives accountable and demand their views are heard.

Mr Ayariga insisted that “no leadership of the NDC will be changed. Changing leadership will not be of any assistance to anybody but I agree with them when they express the disappointment and the feeling of betrayal by their own MPs. We will only do their bidding if they are legitimate.”