A Principal Land Officer at Ghana’s Lands Commission, Mr. Timothy Anyidoho, has cautioned Ghanaians who sell their parcels of land for minerals mining to desist from the practice.
This is because while such parcels of lands may be registered in their names, whatever minerals contained in belong to the state and not their individual owners.
Mr. Anyidoho who described land as comprising of what is beneath or above it, said all minerals, irrespective which lands contain them, belong to the state and not to any individual or group owners.
LISTEN: Ebony’s latest song ‘Konkonsa Police’
The land officer was providing general legal education on land ownership, acquisition and other matters related to land on Adom TV’s legal education show, “me wo case anaa”.
How to determine a genuine piece of land
Providing a response to host Afia Pokua on how to determine a genuine piece of land and its owner, Mr. Anyidoho said to do so, there are three processes involved.
First, the buyer must get a site plan of the piece of land in question, a plan which will determine the boundaries of the land and which must comprise two stamps and a gridline indicating the exact location of the land.
Watch VIDEO: Ebony’s fans dance to her latest song to mark birthday
And, the two stamps, he said must be that of a Government Surveyor and one other Licensed Surveyor.
Once a site plan is acquired, Mr. Anyidoho says the next step is to check from the Lands Commission, through what is referred to as, a “search” for the real owner of the land being sold to you or acquired.
This helps the buyer to find out whether the person selling the land is the right owner of the land.
“There are cases where some families do not register their lands so their names may not appear at the Lands Commission during a search but in such instances the Government Surveyor is responsible for conducting background investigations to determine the rightful owner of the land”, he said.
Also Read: How I shared my husband with a sex doll
When that happens, an elder within the family who has the power to sign such documents is made to do so, on behalf of the family.
Of stool lands and land acquisition through customary law
A piece of land, according to Surveyor Timothy, may be acquired through customary law but in such cases, there is a need to put details of the transfer on paper to prevent any confusion in the future.
As regard stool lands – lands reposed in the names of traditional authorities, Mr. Anyidoho explained that the Constitution does not allow for outright sale of same, stressing that stool lands can only be leased out for a number of years.
Also Read: Amidu to be approved as Special Prosecutor February 20
Indentures
Surveyor Timothy Anyidoho described an indenture as the law that protects your land but says an indenture is only valid when a solicitor puts his stamp on it.
Aside a solicitor’s stamp, two or more other signatures should be seen on an indenture – one belonging to the buyer and the others belonging to the people involved in the selling of the parcel of land, that is if the land belongs to a family.
“If you see a red round sticker or seal on an indenture, it is the symbol from the chiefs, signifying the approval their approval for the sale of the land”, he noted.
Also Read: Ebony signed show worth GHC90,000 she couldn’t claim before her death
Last step in the land acquisition process
According to the Surveyor, the last step to take in order to complete the validity of your document is to obtain stamps from the High Court through registration and an “oath of prove”.
An “oath of prove” signifies the presence of a person at the court who has witnessed the signing of the document after which a “stamp duty” is applied by the court to validate the process.
After all these processes are fulfilled, you are ready with your registration but Mr. Anyidoho strongly recommends that people “obtain a stamp duty because it is very essential.”
Also Read: Atuguba’s “insulting” research irks Chief Justice, other Justices
And yellow card too?
Perhaps to fix yet another puzzle about land jargons in Ghana, show host, Afia demanded to know what “yellow cards” are all about to which Mr Anyidoho explained that “yellow card” is a landed-property jargon which came about in 1986.
“The yellow card is just a document to show that a person has begun the process of registration”, he explained.
He however, added that a yellow card is not a certificate of completion, noting that a certificate has Ghana’s Coat of Arms with the signature of the Lands Commission as marks that authenticate your certificate. 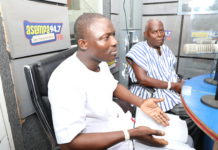 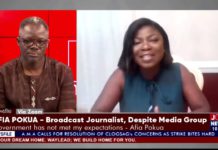 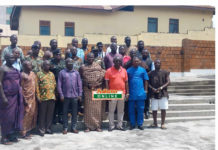 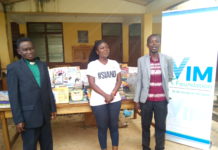