Barbara Mahama, the wife of the late Major Maxwell Mahama has shared hot photos on social media to celebrate her birthday on September 26, 2020.

In the first and second of the photos which were three in number, Barbara rocked a pink-coloured dress with a beautiful bag to match.

The third photo had Barbara wearing a yellow dress with a matching pair of earrings. In all the photos, Mrs Mahama wore a beautiful pair of sunglasses.

Barbara shared another photo on her Instagram stories which had her sitting behind two birthday cakes with her name written on them.

Barbara’s late husband, Captain Major Mahama was brutally lynched to death by residents of Denkyira Obuasi now New Obuasi, on suspicion that he was an armed robber on May 29, 2017. 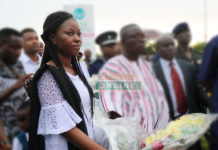