Archbishop Nicholas Duncan-Williams, the Presiding Archbishop and General Overseer of the Christian Action Faith Ministries (CAFM) has broken his long silence on the circumstances leading to his divorce.

He said, he married consciously but he did not know anything about the making up of marriage.

Archbishop Duncan-Williams stated that at age 24, he was asked to marry in other not to fall into the trap of sin.

The man of God got married to Rosa Whitaker some nine years ago after he divorced his previous wife, Mama Francisca after 26 years.

Rosa Whitaker is described as a woman with a solid educational background. She is the president and CEO of The Whitaker Group (TWG) and is recognised as a leading expert on African trade, investment and business.

However, speaking at the International Youth Empowerment Summit in Accra, the CAFM Founder indicated that marriage is not for boys because boys do not marry and that he was a boy in his first marriage.

Buttressing his stance with a scripture, the man of God said: “for this reason, a man shall live his father and the mother and joined his wife”, not a boy shall leave the father and mother and join his girl, he stressed.

According to the CAFM General Overseer, a man is truly the one who understands and takes responsibilities, takes full charge and control them without any external power while a mature man is always focused and decisive.

He contended that men marry for a tangible purpose but boys and most of young men of today marry because of sexual satisfaction and lust of human flesh.

Archbishop Duncan–Williams noted that for one to be fully matured in marriage, it does not matter his or her success in life, level of education, gifting’s, talents, anointed, abilities and capabilities. 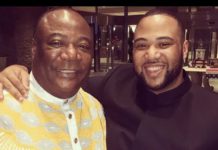