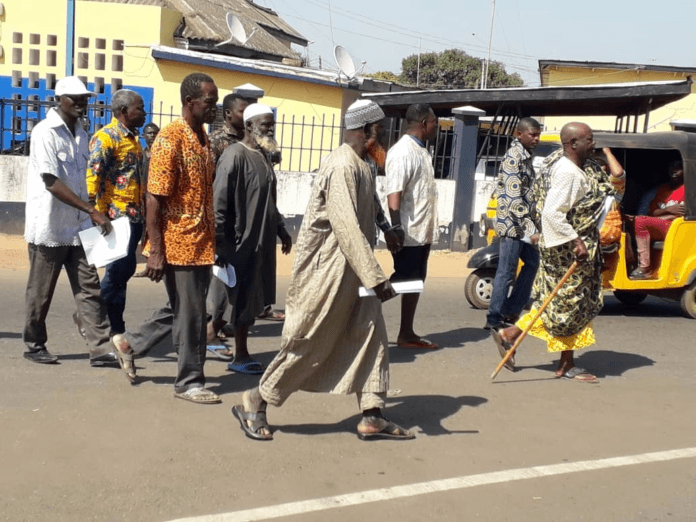 A driver from Akatsi, who was said to have harboured about 20 victims who were unknowingly recruited into the so-called Military wing of the Western Togoland Secessionist group at Dzodze has been granted a ¢100,000.00 with four sureties.

The Circuit Court ordered that one of the sureties of Dormekpo should be earning not less than ¢3,000 a month.

It further directed Dormekpo to report to the Police every Friday.

Dormekpo has denied the charges. The matter has been adjourned to July 10.

Dormekpo was admitted to bail after his counsel, George Asamani filed an application on notice for bail pending trial.

The defence application met stiff opposition by the office of the Attorney General who opposed to the grant of bail.

The court presided over by Ellen Ofei Ayeh after considering the two applications admitted Dormekpo to bail.

On March 5, this year, the same court discharged 21 persons suspected to have been recruited into the so-called military wing of the Western Togoland Secessionist group.

This follows submissions by the state led by Chief Inspector Simon Apiosornu that the 20 persons were “victims of circumstances,” and the Police have no evidence against them.

The court struck out the charges preferred against them and discharged them accordingly leaving Dormekpo who was remanded into lawful custody.

Prosecution said Dormekpo resides at Akatsi in the Volta Region and on Monday, February 17, this year, personnel of the Ghana Armed Forces (GAF) following several days of intelligence gathering on the activities of the so-called Western Togoland Secessionists group, a prohibited organisation, arrested the accused and 20 others at Dzodze in the Ketu North Municipality of the Volta Region.

The prosecution said the 20 persons, including a female had been recruited into the Military Wing of the group.

According to prosecution, the accused who is a member of the group together with others now at large recruited the 20 individuals under the guise of protocol enlistment into the GAF, whiles others were recruited to work in a farm allegedly owned by a certain Whiteman.

The prosecution said the individuals were made to pay ¢400 and ¢800 as registration fees through mobile money (MoMo) number in the name of Samuel Gafa currently on the run while others paid cash.

The Prosecution said these individuals were made to assemble at Dodze and the accused accommodated five of them at his home at Akatsi for a week before transporting them to Dzodze en-route to the training camp of the Western Togoland guerilla army to commence training in a forest at Dzodze.

During investigations, it was revealed that the 20 recruits arrested were deceived into believing that they were being recruited into the Ghana Armed Forces and also to work on a farm.