Controversial singer, Wendy Shay, threw indirect shades at legendary Samini when she excluded him from the ‘S’ supremacy.

The ‘4S’ supremacy signifies top-rated male artistes whose name start with an ‘S’.

Wendy Shay mentioned Sarkodie, Shatta Wale and Stonebowy, but exempted Samini and rather inserted her name ‘Shay’ into that category.

The disregard has forced Samini to crawl out of his shell and explain the key features an artiste should have in order to join the supremacy.

“There must be Power in the letter ‘S’. You need a suit with it written on your chest lol. You want to make the list so bad ‘WS? ‘S’ for star, S for spirituality, S for seriousness, S for simplicity, S for solar .. make I continue? The name must start with ‘S’ if anything,” he tweeted.

His sarcastic response has made Wendy Shay a laughing stock from trolls who would rather have her silent than chase clout. 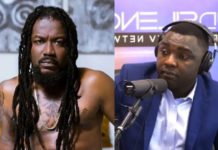