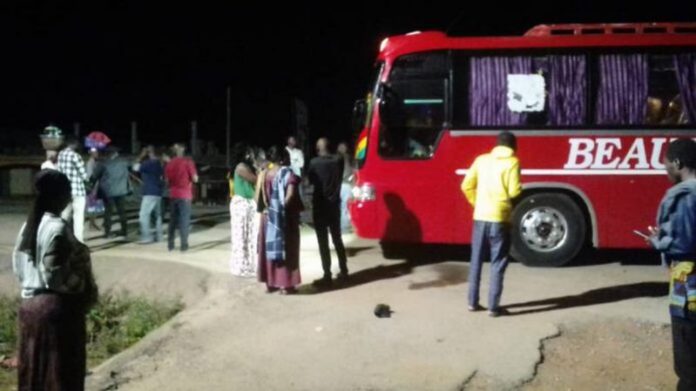 Two of the suspected armed robbers who asked travellers to pray for them after they robbed them on a VIP bus in the Western Region have been shot dead in a gun battle with Police.

This was made known on the official Facebook page of the Ghana Police Service.

According to the police, one other person has been arrested and is currently in Police custody.

Full details, the police said, would be communicated in due course.

Five armed robbers, wearing masks with guns and other weapons, attacked over 40 passengers onboard a VIP bus with registration number GT 5795-16.

Reports indicate the bus was travelling from Takoradi in the Western Region to Kumasi in the Ashanti Region.

Ekua, a passenger on the bus, said the bus moved from the Abenbebon Station at Apremdo, Takoradi at around 10:30 pm on Sunday.

“At around 3:30 am on Monday, February 21, 2022, about five armed robbers with rifles and other weapons attacked us and made away with our monies and other belongings. All of them were wearing masks,” she narrated.