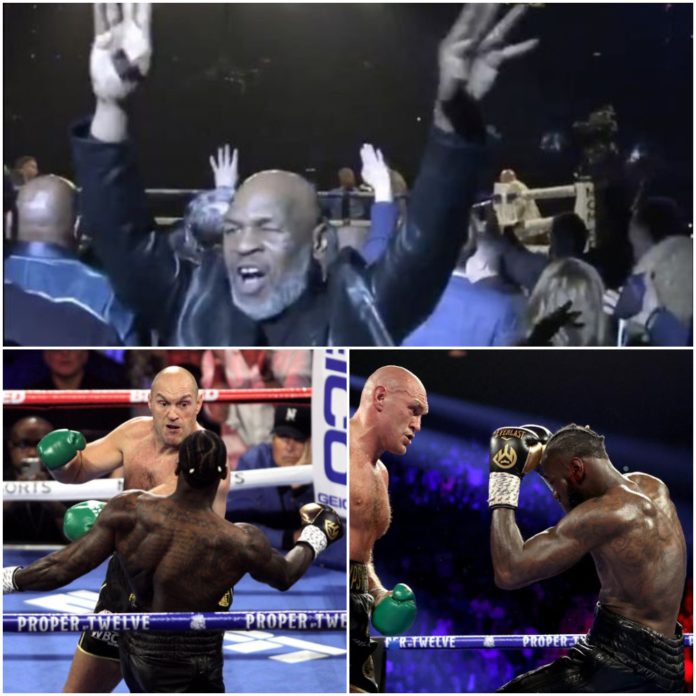 Fury out boxed Deontay in a match that was becoming largely one-sided, causing the WBC champion’s side to thrown in the towel.

Deontay’s nightmare may have worsened but for his corner’s decision to throw in the towel, especially with the meanness with which Fury was dealing with him.

Shortly after the, a video of the legendary Mike Tyson celebrating his namesake’s victory has popped up.

Mike the “Iron Man” Tyson was, for the match, given a medal by WBC in the alongside other boxing legends, Evander Holyfield and Lennox Lewis.

Dressed in a black overall suit and wine trousers, the 53-year-old former heavyweight champion jumped up in delight after the referee put the fight on stop with Wilder’s life on the red line.

Mike Tyson’s wild jubilation might be owed to the fact that Wilder had always taunted him as a potential opponent to defeat should both fight in the same prime.

Below is the video which was posted by BTSportBoxing:

When you remember there's a #NoFilterBoxing fight night episode for #WilderFury2 to look forward to… 😁 pic.twitter.com/pbxC4jrr9I