However, some music-loving fans are wondering if the danceable song was readied for the Easter season hanging around the corner.
Read: Hot Videos: Shatta Wale showcases his “Zylofon mansion” in a video
Even though the song features ‘top’ musicians Mr Eazi and Pappy Kojo, a lot of the buzz on social media is directed towards the ‘One Corner‘ hitmaker’s verse on the song.
Nonetheless, this is what some fans had to say about the song on social media: 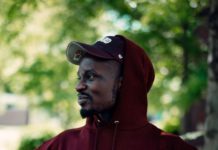 Double win for Mr Eazi as he graduates from Harvard University