Ebony’s manager, Ricky Nana Agyeman, popularly known as bullet has taken a swipe at artistes demanding ‘performance fees’ to perform at Ebony’s Tribute Concert happening at Trade Fair on March 23 in Accra.
The member of the now defunct Ruff & Smooth vented his anger on Facebook, saying he couldn’t understand why some artistes would want to be paid when they had already showcased their love for Ebony to the world.
According to him, some of the artistes came to the “one week memorial” of Ebony to flaunt themselves due to the live telecast and the number of people at the event.
SEE ALSO: VIDEO: I’m passionate about my talent not certificates – Uncle Ebo Whyte
Read his full post below:
“Some of our Ghanaian artistes are hypocrite, you came to Ebony’s one week observation because the numbers were there and again it was being telecast live on air so some of you came there to use the platform.
Now you’re asking me to pay you for her tribute concert. I thought you loved her as you claimed on stage at her one week. This is pure hypocrisy. Big thanx to every artistes who has decided to support us. We are grateful. #EbonyIToldYouSomeGhArtisteAreNotReal #RIPEbony #RuffRecords #Midastouchinc”
See this: Video: Uncle Ebo Whyte almost became a mechanic 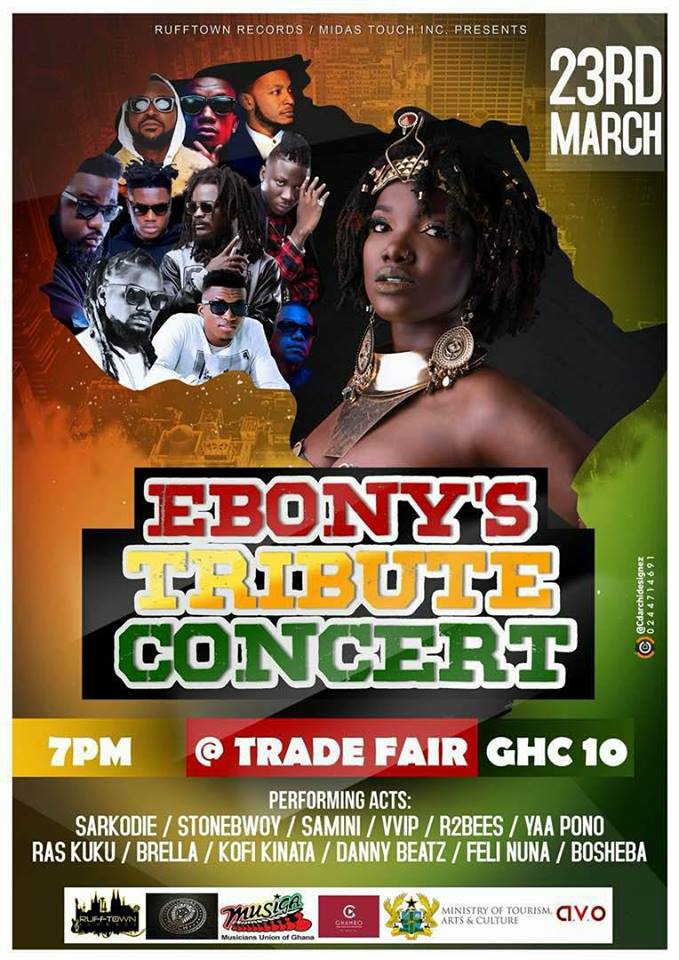 An A-List ensemble of musicians including Yaa Pono, Ras Kuuku, Sarkodie, Stonebwoy, Samini, VVIP, R2Bees, Ras Kuuku, and Nana Boroo have all been billed for the concert, which is expected to attract thousands of fans.
Other expected performers include Kofi Kinaata, Feli Nuna, Brella, Danny Beatz, and a host of others.
The Rufftown Records/Midas Touch Inc. event, comes off in partnership with the Musicians Union of Ghana (MUSIGA), Ghana Music Rights Organisation ( GHAMRO), and the Ministry of Tourism, Arts and Culture.
The late singer, Priscilla Opoku Kwarteng, widely recognized as Ebony met her untimely death in a February 8 in a car crush on the Kumasi – Sunyani road.
She is expected to dominate the Vodafone Ghana Music Awards night slated for April.
Her final funeral rights have been slated for Saturday March 24 at the forecourt of the State House.