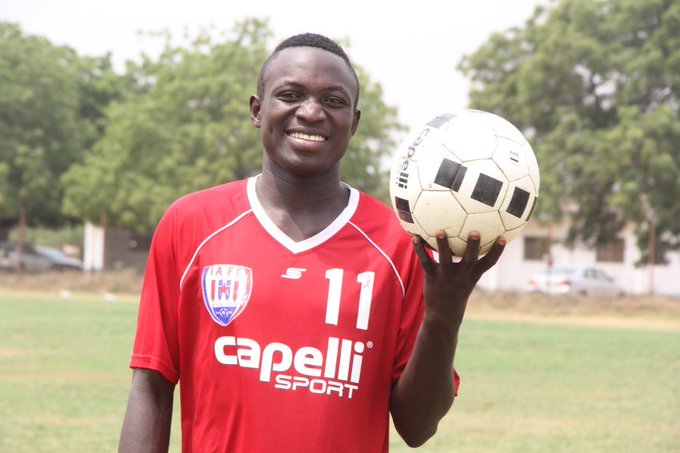 Hearts of Oak have held talks with Victorien Adebayor as the club hopes to wrap up a deal to sign the striker from Inter Allies.

The Nigerien ace has been sensational for the Tema-based side in the ongoing Ghana Premier League.

Adebayor is currently leading the goal scorers chat with 11 goals.

The Phobians were on the verge of signing the talented striker before the start of the 2019/20 season but failed to meet the demand of Inter Allies.

Despite signing Abednego Tetteh last month, the Rainbow club are closing in on the striker to help score more goals as they hope to end the nine years trophy-less jinx.

According to Kumasi based Nhyira FM, the majority shareholder of the club, Togbe Afede XIV was spotted together with Victorien Adebayor at the Accra Sports Stadium on Sunday in their MTN FA Cup win over Danbort FC in the Round of 64 matches.

The second half of the Ghana Premier League transfer window will open in March.

After 11 matches played in the ongoing season, the former Ghana Premier League champions have scored 9 goals and have conceded 11.

Captain Planet reveals what he thinks about dreams he’s had about...

How much is too much for a friend interfering with your...

The real reason why your brain never wants you to exercise