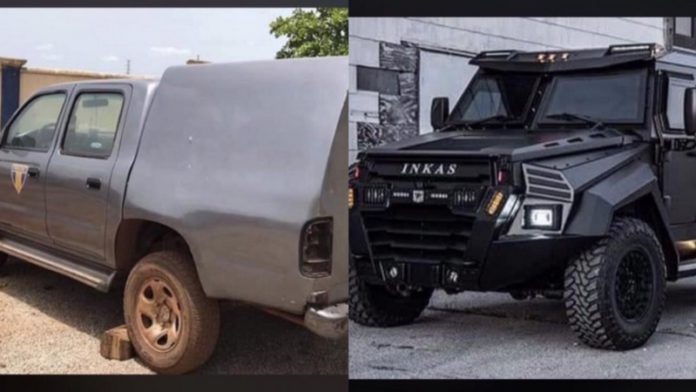 The Inspector-General of Police (IGP), Dr George Akufo Dampare, has renewed calls for the use of armoured vehicles in the transport of bulk cash following a foiled robbery attack on a bullion van on Tuesday.

The attack at the Industrial area in Accra left at least three persons with various degrees of injuries. They are currently on admission at the Korle Bu Teaching Hospital.

In a statement on Facebook hours after the attack, the IGP said: “Beyond the Police intervention, the armoured bullion vehicle used saved the lives of the officials and the Police officer onboard the vehicle even though the robbers fired into the van.”

According to the IGP, “It has, therefore, become necessary to re-echo the Police Administration’s call for all financial institutions in the country to resort to the use of such fit for purpose vehicles for their cash in transit activities.”

The Police assured the public that they have intensified efforts to get the perpetrators arrested to face justice.

“We will surely get them,” the IGP said.

The Police Administration commended the Police officer whose intervention foiled the robbery incident.

4 bullion vans attacked in the first half of 2021

The first half of 2021 recorded four bullion van attacks.

JoyNews‘ checks reveal that the robbers bolted with the cash on-board the vehicles in three of the incidents.

In two of the cases, the police officers escorting the van lost their lives.

On January 18, 2021, some highway robbers numbering about 10, attacked a bullion van travelling on a section of the Adansi Fomena road in the Ashanti Region and an amount of ¢500,000 was stolen.

In broad daylight on March 1, 2021, a bullion van belonging to a popular bank was robbed on the Spintex Road at Baatsona near the Danpong Hospital by some armed men numbering about four according to eyewitnesses.

The situation got worse in June as two bullion vans were attacked within three days.

The first incident happened on June 14, 2021, when a bullion van was attacked at Adedenkpo near James Town in Accra.

The Police officer escorting the van and a woman were killed with the driver sustaining serious injuries. The robbers bolted with the money.

The second attack occurred on June 17, 2021, when a bullion van was attacked on the Winneba-Accra highway.

The unknown assailants shot at the van at the Okyereko and Dominase on the Winneba-Accra stretch.

Aside the driver, the van was occupied by two policemen with an amount of ¢550,000 on board.

Fortunately for them, they escaped the gunshots and were rescued by the Winneba Divisional Police who escorted them back to Accra.