Two persons have been confirmed dead in illegal mining activity at Sefwi Yaw Brefo in the Juaboso district of the western north region.

The deceased, Kelvin Abugiri, 22, and Dramani, 21, were reported dead by the medics at the Juaboso Government Hospital mortuary.

According to the report, the duo died in a ‘river’ after they went there to wash their clothes.

Unfortunately, Dramani fell into the river. In an attempt to rescue Dramani, Abugiri also got trapped in the river.

The bodies have been picked up by the Juaboso police command and have been deposited at the hospital morgue. 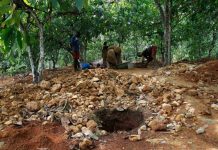