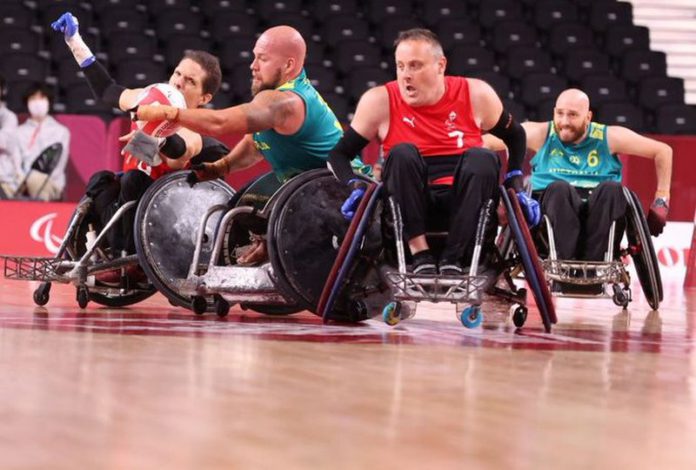 Just over 60 years ago, the first Paralympics took place, with a mission to be an inclusive sporting event for those with disabilities.

And with the Games underway in Tokyo, they are on track to become even more inclusive, with at least 28 openly LGBTQ athletes competing – a record number.

That’s more than double the number of athletes who competed at the 2016 Paralympic Games in Rio, according to sports news site Outsports.

“What’s happening at the Tokyo Olympic and Paralympic Games is a far cry from the first Athens 2004 Games I participated in as a young queer person trying to figure out my sexuality,” Theresa Goh, a 34-year-old Singaporean Paralympic swimmer, told the BBC.

Theresa, who was born with spina bifida, came out as queer after winning a bronze medal at the 2016 Rio Paralympic Games.

She says her parents’ support was central to her coming out publicly – her mother turned to her at the age of 14 and told her all they wanted was for her to find someone she loves, regardless of gender.

“I didn’t know how to react at first. They don’t just write manuals for situations like this,” said Ms Goh.

“I can’t imagine it was easy for my parents to learn their first child was born with a disability, and then later learning she’s also queer.”

However, public reaction was more difficult to anticipate.

She recalls being afraid to go back to training after coming out, worried that she might receive dirty looks from parents at the pool. But she says she received nothing but support.

This year’s Olympics which wrapped up earlier this month have been pivotal for the movement – with more than 100 athletes, including medal winners, speaking openly about their sexuality.

“Coming out is very difficult because the culture within sports is still so immensely ‘macho’ even though a lot of athletes have shown support,” US Olympian Danell Levya, who came out on Twitter last year.

The 29-year-old gymnast says he received a lot of support from Olympic champions like Laurie Hernandez and Simone Biles.

“To create more change, more support can be shown by those at the top,” he told the BBC.

But there is still some way to go. Just one active player has come out as queer in America’s National Football League’s 100-year history.

NFL player Carl Nassib came out in June this year, during pride month in the US.

In an Instagram post, he said that he’d been meaning to come out for the past 15 years – thanking family, friends, teammates and coaches for helping him feel comfortable enough to now speak out.

“Athletes need to know that their teammates and coaches will have their back if and when they choose to come out,” Joanna Hoffman, from advocacy group Athlete Ally, told the BBC.

“Men’s sports have traditionally lagged behind women’s in terms of numbers of ‘out’ athletes and allies.”

But that is changing with every athlete who speaks up, Ms Hoffman added.

Training for the future

Ms Goh says that coming out meant more for her as an athlete – representing a sort of liberation – allowing herself to compete as her true self, without fear.

“I think because we are in the spotlight, it’s a little more impactful to see us come out,” said Ms Goh.

For Mr Leyva, wanting to help others encouraged his decision.

“I wanted to help make it as normal as asking someone whether they are right or left handed,” said Mr Leyva.

Of course, the Olympics and Paralympics are a convergence of athletes from all over the world, and not all countries have witnessed equal strides in gay rights.

There are 69 countries and territories globally where homosexuality is still outlawed, and all but two of those countries have sent athletes to Tokyo.

That said, for the world’s most famous sporting event, things are changing, albeit gradually.

The number of Paralympic athletes coming out join a list of 180 openly LGBTQ Olympians who competed in Tokyo this summer – three times more than the number of athletes that were “out and proud” in Rio.

They include athletes who have each made waves in their respective sport, like British diver Tom Daley, US track and field champion Raven Saunders, and New Zealand’s weightlifter Laurel Hubbard.

And Ms Goh is optimistic that the list will only keep growing.