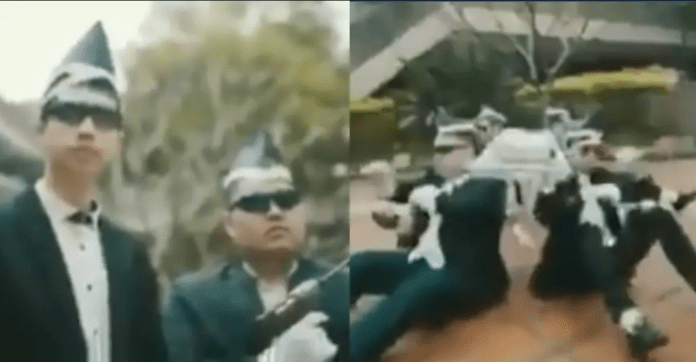 A group of foreigners whose nationalities are yet to be known has come out with their own version of the viral Ghanaian pallbearers in a video that’s beginning to go viral.

From the video sighted on Facebook, the light-skinned men purely imitated the Ghanaians to the mark, as they portrayed the exact moves and steps in the same sequence.

It is also clear that the video of the foreigners is beginning to gain traction and has started being used in many funeral memes around the globe as it was even used in an ad by a company as seen in the cited footage.

Perhaps the main difference would be that the foreigners did not use an actual casket in the particular video.

In addition, the footage was taken without any actual funeral gathering or procession, unlike what has been seen in the videos of the original pallbearers.

Many people have been reacting to the video including a gentleman named Meek Vilis who has called on the Ghanaian group to sue these foreigners:

It is not fully confirmed whether the foreign pallbearers obtained permission from the Ghanaians or not.