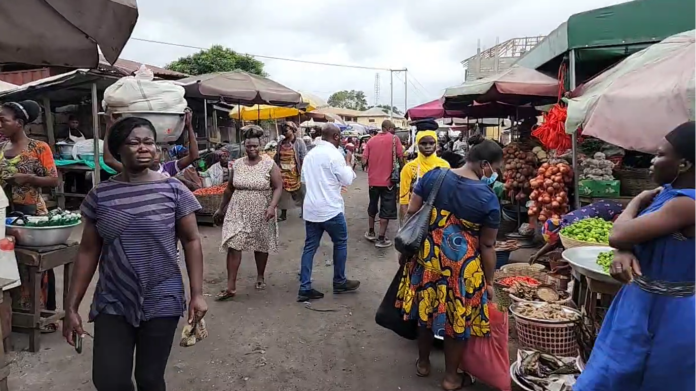 Market women at Madina in Accra are lamenting over the continuous increase in fuel prices.

They claim transportation has increased and their capital is being invested into moving foodstuffs from the farms to Accra.

The women expressed their frustration on The People’s Forum, a segment on Adom FM’s morning show, Dwaso Nsem Thursday.

A livid trader, who sells vegetables, said her profit has dwindled due to the increase in transport fares. Even more worrying, she stated, is how she has to haggle with customers before they buy her goods.

Majority of the traders said they have lost their capital and are now relying on families and friends for support.

Aside this, the market women also complained about the poor drainage systems in the market.

They said their health is at risk due to the open gutters with stagnant water emitting pungent scent they endure all day in the market.

They are, therefore, appealing to the La Nkwantanang Madina Municipal Assembly to come to their aide by ensuring that the refuse is cleared and gutters cleaned to save their health.

The market women threatened to stop paying the daily tolls if the Assembly does not address their concerns.

He said the traders are forced to close their shops when it rains but countless appeals to the Assembly have yielded no results.

The Assembly man bemoaned how the traders pay tolls but the money is not being used to develop the market.