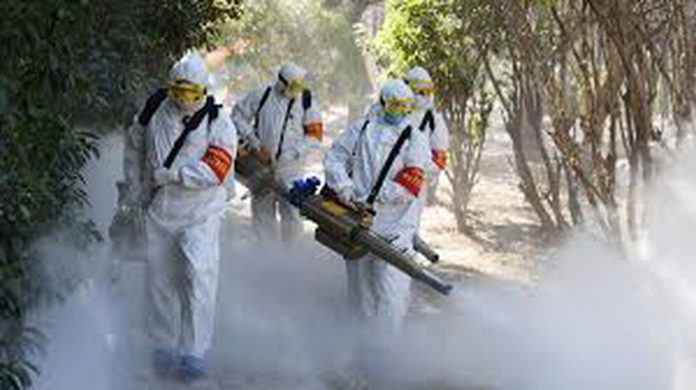 For many months, Ghanaians monitored international news networks reporting the battering of Wuhan, in the Hubei Province of China by the novel coronavirus disease – now christened covid-19.

People in their hundreds and thousands got infected each passing day. Some could not survive the virus’ assault on their lungs and died.

Action on a global scale was inevitable as many countries began to institute measures to prevent a spread of the virus into their countries.

Ghana was no exception.

President Akufo-Addo set up the National Technical Coordinating Committee to ensure the virus was not imported into Ghana or at best that it was detected early and contained if it entered the country.

Scare turned into reality on Ghana’s Independence Day when Ghanaians woke up on March 6 to news of a Chinese national and his Argentine friend who had been taken into quarantine at the Korle Bu Teaching hospital after showing symptoms.

But it was news of the Chinese national reportedly escaping from quarantine which sparked panic not only among the general public but also among doctors, nurses and other health professionals who worked at the Korle Bu Teaching Hospital.

Some took to their heels, according to eyewitness accounts, after hearing the news of a possible coronavirus infection there.

As it turned out, officials reported negative results for both men and ‘discharged’ them. This is the official account by the Ghana Health Service and the Health Ministry – a story I still doubt. Did the Chinese man test positive? Did he eventually die? So far there is no official information to this effect.

When the virus spread from Asia, through Europe and to Ghana’s neighbours – Togo, Burkina Faso, Ivory Coast and, big brother Nigeria – the reality dawned on us and the stage was set for a spread into Ghana. It took a while but it happened.

Ghana’s first cases would come not from its neighbours but from Norway and Turkey on March 12, 2020. Since then, several imported cases have been reported, the most remarkable among them being that of the Lebanese trader in Kumasi who died shortly after being admitted to the hospital.

There’s also the story of the 35-year-old man who appears to have been infected by the virus while on a trip to France, but has shown no symptoms till date. He has offered a ray of hope that the disease can be defeated. He’s granted us interviews and we are in touch via WhatsApp as well. He says he is in good sprit and is hoping for a negative result when he gets tested again in the coming week.

Coverage
Covering the unfolding epidemic in Ghana has not been an easy road for journalists in the country. I for one have had to take a lot of calculated risks and criticism for my enthusiasm in getting the story wherever it might be.

I’ve also interviewed several Ghanaian students who were caught up in the initial outbreak of the disease in Wuhan who were desperately crying to be repatriated home as well as government ministers and many other people who have shared privileged information with me.

Information flow has been very slow, and many a time, I’ve had to break stories ahead of the authorities to the displeasure of some persons in government and the Ghana Health Service who thought I should have waited for them to make official pronouncements first. I respect their views but will strongly disagree with them.

We watched CNN declare a statement of emergency ahead of the WHO and it was fine. We’ve seen Sky News and other international TV networks speak live to patients on their hospital beds with tubes in their nostrils.

Why should the Ghanaian media do any different and wait for official announcements when matters are so glaring? Wouldn’t we be doing the public a disservice if we waited inordinately for official pronouncements?

Many have asked if I am satisfied with the way we’ve responded as a country to this crisis? I say ‘yes’ but with a little caveat.

First of all, government set up committees to manage the situation even before the disease started spreading out of China. I heard leaders of some great nations like the United States admit publicly that they were caught off-guard.

Ghana on the other hand prepared well, even though we lacked the financial resources, and put in place measures at our borders (land, sea and air) and also put our health professionals on alert at the national, district and regional levels.

I’ve also been allowed into a meeting of the Risk Communication sub-committee of the National Technical Coordinating Committee and I’ve been impressed about the strategy they have mapped out, working with NADMO, the Information Services Department and many others.

My disappointment, however, has been with what I believe was a rather belated decision to close our borders. The president made the announcement on Saturday evening and I have no doubt that it’s the right decision. We would have done much better with managing the situation if we had shut the border much earlier than we did.

At the time of writing this piece, Ghana has 24 confirmed cases with one death. All those in isolation were doing very well especially, the man who contracted the virus in Paris and keeps in constant touch with me through WhatsApp and calls.

I expect a majority to fully recover and even be discharged from isolation.
The unfortunate situation, however, is that we’re likely to record more cases from the contact-tracing which has been done so far.

I’m particularly worried about Kumasi, where the late Lebanese trader contracted the disease from an unknown person. It is likely that infected person has not shown signs yet and does not know therefore that he or she is infected and still going around interacting with people.

This is where the prevention advice comes in handy.

Should we end this week with cases at 40 or less, it will simply mean that measures adopted so far are paying off and will be on our way to defeating this dangerous virus. But if the number of infected rises above one hundred, then we might all brace ourselves up for a very tough battle against this diseases. We can only hope, pray and prepare.