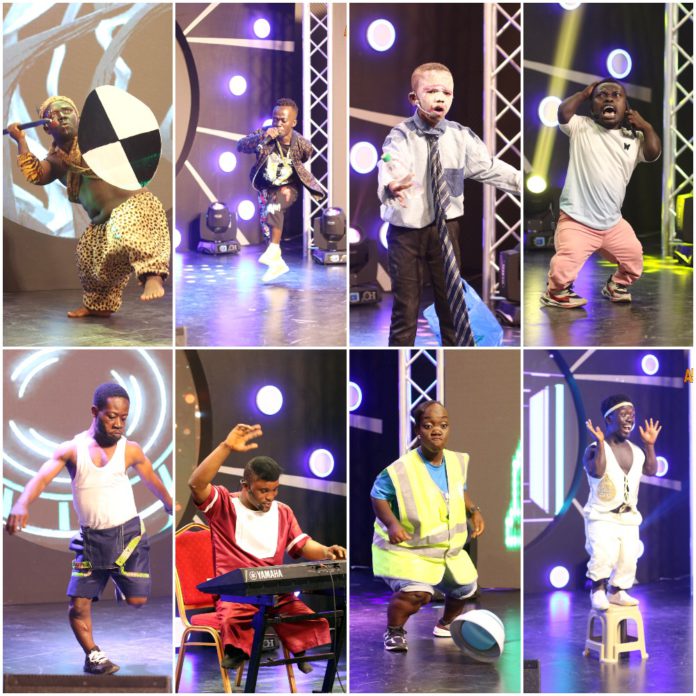 The second week of Adom TV’s The Big Talent Show saw contestants pushing themselves to the max to showcase their talents to poised judges in order to make it to the next stage of the reality show.

This week, comedian Clemento Suarez joined judges Adwoa Smart and Akumaa Mama Zimbi to decide on the fates of performances of the various competitors.

Meanwhile, eviction is up this weekend, hence any of the contestants with the least votes will have to be marched out of the competition.

Fans are urged to vote for their favourite contestants if they want to keep them in the competition in the upcoming weeks by dialing the short code *713*208# on their mobile phones.

To commence the performance this week was Short Prophet. As his moniker suggests, he opened up the show not with prayer but his powerful voice and sang one of Sonnie Badu’s song. The contestant, prior to the reality show, won the heart of many including Sonnie Badu himself.

Contestant Fred followed up as usual with his fast dancing parade. The judges, wowed by his moves, gave him a solid round of applause after he climaxed the performance. Akumaa Mama Zimbi lauded him for his choice of song but the other judges advised him against his wardrobe.

Size Two keeps impressing patrons with his acting prowess as he mimics Joseph, the father of Jesus Christ and the husband of the Virgin Mary. He staged his craft with a conversation with the Holy Spirit.

Bie Gya, in this week’s edition, decided to be a cleaner who loves to dance. Wearing her cleaning apparel, she exhibited wild moves to keep her in the tight competition.

C-Nortey followed up to the podium with a plastic chair. Fans were skeptical about it until they realised it formed part of the dancing process.

Martha proved her talent by singing Kuami Eugene’s Wish Me Well song. Indeed, she was flawless giving no hint of performance anxiety.

Clad in his singlet and shorts, King Solomon didn’t come to play. Performing like none other, the contestant performed well but judges urged him to focus on the audiences.

Faith Power showed that he is a man of many talents in the second week of the Big Talent Competition. Unlike last week where he did some acrobatic moves, this week, he came in with an organ to show his music side too.

Contestant Nana Yaw showed his warrior ambition by fusing it with his performance. Clad in a traditional outfit he amused the audiences with his war-like gestures – holding a spear and shield.

Shatta Wifi brought Kuami Eugene into the auditorium as he performs his song with Kwame Yogot dubbed Biibi Besi. His energetic performance formed part of those who did well on the night.

Ankaa Baako did a cover of R2Bee’s ‘Makoma’ song but he changed the lyrics to suit his style. The slow-groove highlife tune got many patrons rocking their heads in awe about the performance.

Tapoli climaxed the week 2 in style. His live comedy skits got many laughing when he presented himself as a “quack” doctor making sales in a bus.