Benjamin Okyere, the tenant who was allegedly shot by his landlord, Victor Steve Nana Kamkam at Ofankor ‘Spot M’, had a dream prior to his demise that he was shot at by the latter, a family member has alleged.

According to Reverend Grace Adusei, who is a relative to the deceased, the late budding musician, informed his mum about a dream where he said he saw Mr Kamkam pointing a gun at him before his death.

He had had a dream that the landlord had pulled a gun on him so he had already planned on moving out. His mum discussed it with me but it was unfortunate he was killed a day before he decided to leave. He is my brother’s son, she told Adomonline.com in an exclusive interview.

She added that, before she received the news of Mr Okyere’s death, she had felt the hunch that something terrible was about to happen.

I was cooking and my heart skipped on Sunday. I felt some sharp pain in my heart. It wasn’t long until my sister called me crying, informing me about the incident, she noted.

Meanwhile, Mr Kamkam has since been arrested but has refused to give details of why he took the deadly action though he has not denied killing his tenant.

All he told Adom News was that he took the action out of self-defence.

Reverend Grace, reacting to the self-defence statement, said it doesn’t sit well with her.

Whatever it is I don’t think it is right to shoot him. How do you wear bulletproof and carry a shotgun to your tenant’s house to shoot him while he has already agreed to move out? She queried.

He is a calm person and he doesn’t like to talk much. The last time I saw him was in Kumasi. He was optimistic he would make money from music to take care of his family, she added.

Climaxing the interview, she said she wanted justice in the law court because the said landlord had killed a breadwinner.

She said it was sad that the mother of suspect Kamkam hasn’t made any effort to contact their family.

If she had the heart of a mother she will call his mother to know how she is feeling but she is rather focused on getting her son out of jail, she said. 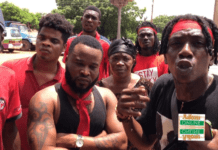