American singer, Teddy Riley, has reacted to allegations made by entertainment pundit Emmanuel Barnes, popularly known as Mr Logic, that he wanted to collaborate with Stonebwoy on a song.

Mr Logic had earlier made an allegation on Hitz FM that fallen producer Willi Roi blocked Stonebwoy’s chance of collaborating with Teddy Riley and top singer R. Kelly because the Bhimnation leader was stubborn.

The discussion came up on the Daybreak Hitz on Hitz FM show where Andy Dosty asked Mr Riley if he ever wanted to feature the Bawasaba hitmaker and his answer was negative. 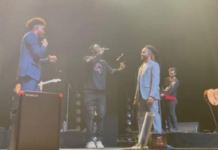