One person is reported dead whiles three Fulani herdsmen are on the run after breaking Techiman Nsuta police cells.

According to the reports, the residents of Nsuta a suburb of Techiman in the Brong-Ahafo Region were alarmed by a gunshot that emanated from the police station.

This prompted the townsfolk nearby to rush to the scene and to their dismay; they met a lifeless body that resembled a young Fulani man behind the counter, a frightened inmate and one police officer on duty.

Joy News’ Brong Ahafo Regional correspondent, Anas Sabit who followed the story reported that, the police managed to shoot one of the escapees who died on the spot.

He said the incident occurred when the toilet facility had no direct water source and required at least a bucket of water to push down nature’s call.

While opening the cell to hand over the buck of water, four inmates overpowered the officer and took to their heels.

He noted they have since mounted a manhunt for the three suspected to be Fulani herdsmen.

Anas Sabit said the body of the deceased has been deposited at the Techiman Holy Family hospital morgue pending autopsy.

Superintendent George Afari Yeboah said the four were expected to be arraigned this week. They have been charged with stealing.

Three of the inmates were part of seven suspects who allegedly stole 17 cows at Yeji. The three were on remand because they failed to meet bail conditions.

The other fugitive is also accused of stealing 11 bunches of plantain.

Supt. George Yeboah said information has been sent across various police points within and outside the region to help re-arrest the escapees. 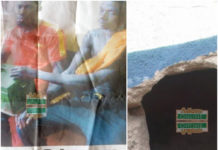