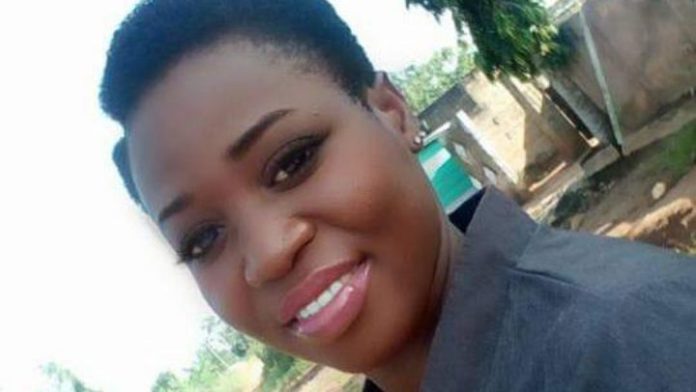 Sylvia Etornam Gbormita, a teacher at the Border Basic School at Aflao in the Ketu South Municipality of the Volta Region, has died in what many has described as a freak road accident.

Etornam, as she was popularly called, died on Friday, April 8, 2022, in an accident that left her body parts dismembered in the most bizarre nature.

The 36-year-old Etornam was said to be in the company of her friend, Likem Agbavor 34-year-old who was driving at the time of the accident.

Mr Agbavor, who survived the accident, is said to be recovering after series of surgeries at the Ho Teaching Hospital.

Initial information that spread through the Ketu South Municipality and other parts of the region suggested that she might have been murdered and her body dumped on the road for other vehicles to accidentally mutilate.

However, preliminary investigation by the Police points to a bizarre vehicle accident on the Denu to Tokor portion of the West-African Highway that traverses the Ketu South Municipality into Lome, Togo.

DSP Eric Vondee, the Ketu Divisional Crime officer, who confirmed the incident, explained that the accident happened around 11:00 pm.

Likem is said to have recently returned from the US and had gone to visit Etornam at Tokor.

They went to get food from a popular restaurant in the Denu area and got involved in an accident while returning to Etornam’s residence at Tokor.

DSP Vondee said, the driver after regaining consciousness from Coma, said all he could remember was that a vehicle from the opposite side (Tokor direction) over-took some vehicles towards him.

He remembers veering onto the side of the road only to wake up on a hospital bed.

However, accident scene investigation suggests that the Toyota Corolla indeed veered to the side of the road, grazed the guard rails, and knocked down an electric pole before hitting another guard rail up ahead.

Furthermore, it appears the lady might have fallen out of the vehicle during the course of the accident; leading to other vehicles mutilating the body. The body also appears to have been dragged on the street for about 30 to 40 meters.

The body was deposited at the Ketu South Municipal Hospital Morgue while the driver was rushed to the Ho Teaching Hospital. The vehicle is also damaged beyond repairs.

He also said the latest information from his investigator on the case, G-Cpl Wisdom Kove also indicates that the driver is recuperating after suffering from internal bleeding and injuries which led to some procedures on both ribs and abdomen.

DSP Vondee noted that investigations are still ongoing and that should the driver get better, he will be able to further assist in the investigations.

She was transferred to the Eastern region before finally to Aflao in the Volta Region.

She has close ties with her hometown, Keta and an active alumni of her former school, St Paul’s SHS at Tokor and Amazing Love School in Aflao (Basic level).

Etornam who is a breadwinner in her family, had a bachelor’s degree from the University of Education, Winneba in 2016 and currently pursuing a master’s degree before her untimely death, Daily Guide further reported.