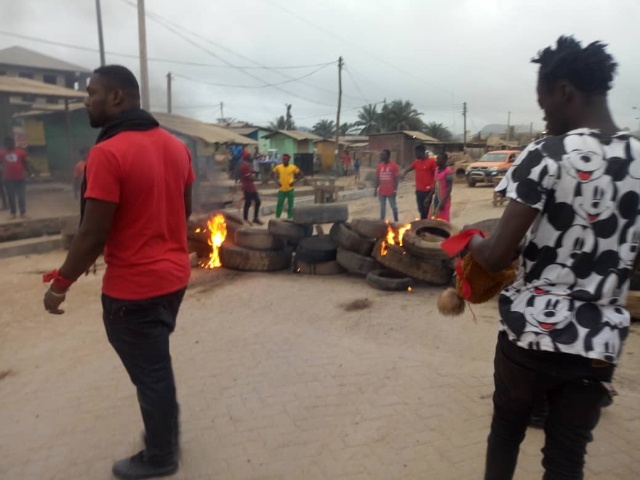 The root cause of the stalled road construction at Tarkwa in the Western region which led to massive demonstration has been revealed.

According to the Municipal Chief Executive (MCE) for Tarkwa-Nsuaem, Hon. Gilbert Ken Asmah, the contractor, Asabea Engineering Works Limited abandoned site due to non-payment of monies due him.

“The contractor told me all certificates he raised for payment have not been redeemed and it is affecting his work,” he recounted.

Residents in the area on Wednesday April 10, 2019 expressed their displeasure over bad roads with a massive demonstration.

They blocked the major highway, burnt tyres and gave government two weeks ultimatum to fix the road or face their wrath.

Reacting to this, the Tarkwa-Nsuaem MCE on Adom FM’s Dwaso Nsem Thursday said there is no
cause for alarm.

He noted that, having foiled about eight planned
demonstrations, Wednesday’s own was justified because the people were fed up.

Hon. Asmah cited how the dusty nature of the road was causing some nuisance to households, shops and pedestrians who ply the road to buttress his point.

That notwithstanding, he said the government has been able to make some payments for the contractor to return to site.

The Tarkwa-Nsuaem MCE is confident the Roads Ministry will make cash available for the completion of the roads.

Hon. Asmah appealed to residents in Tarkwa and its environs to exercise restraint as the government mobilises funds to pay all outstanding debts.