Menaye Donkor, the wife of Ghanaian international footballer, Sulley Muntari, has revealed why they never had a white wedding after their traditional marriage.

According to the Ghanaian model and businesswoman, though they could have afforded one if they wanted to, her dad did not like the idea.

“We did a traditional wedding ceremony and that was what my Dad wanted which is the normal way so Sulley’s family respected that. We never did a white wedding because we all didn’t want to at that moment,” she said.

She explained that her husband was moving to another Club in England so relocating and all that was a whole lot, hence they didn’t want to add up plans for a white wedding.

However, her perspective on the significance of white weddings could have also influenced their decision. 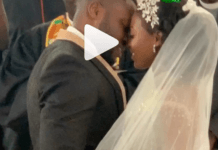 Muntari is “jealous and respectful” – Menaye