A Circuit Court in Accra has sentenced a 24-year-old student, Francis Aggrey, to three years imprisonment for attempting to blackmail his girlfriend, a policewoman.

Francis Aggrey who disguised himself on social media threatened to circulate nude videos and photos of his girlfriend if she fails to pay an amount of GH¢3,000.

Aggrey, who was charged with two counts of conspiracy to crime and extortion, pleaded guilty.

The court presided over by Mr Emmanuel M. Essandoh, convicted Aggrey on his own plea, and sentenced him to three years imprisonment on a charge of extortion. An accomplice, Christian Donkor, is at large.

The prosecution, however, prayed the court that the police would need Aggrey to assist to apprehend his accomplice.

The court, therefore, deferred its sentence on a charge of conspiracy.

Detective Sergeant Frederick Sarpong told the court that Aggrey cited jealousy as reasons for extorting GH¢3,000.00 from his girlfriend.

The 24-year-old convict, according to the prosecution, suspected that the girlfriend was cheating on him, hence he plotted with Donkor, his accomplice, to extort GH¢ 3,000.00 from her.

Detective Sergeant Sarpong said the complainant, a policewoman, and Aggrey had been in an amorous affair for some time and on May 15, this year, Aggrey suspected she was cheating on him.

The convict then created an online chatting account on Telegram with the name ‘Nana N’ and portrayed himself as another person and started chatting with the complainant.

The prosecution said, the complainant reported the incident to her boss who disguised himself and had a chat with the accused persons.

On the same day, the complainant’s boss made payment of GH¢ 1,500.00 to Donkor through the said mobile money account. The boss, upon interrogation, suspected that Aggrey was behind the deal and asked the complainant to confront him.

On May 18, this year, the complainant confronted Aggrey and he admitted and cited jealousy as his reason for doing that.

Aggrey was arrested on May 19 and handed over to the Bureau of National Investigations and National Security.

During interrogation, he mentioned Donkor as his accomplice, whose efforts were being made to arrest. 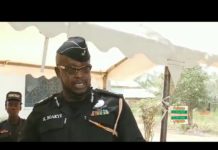 Police to cater for funeral of officer killed at checkpoint [Video]