He, therefore, called for collaboration with faith-based organisations to up the campaign against ‘galamsey’.

Briefing the media after a closed-door meeting with various Christian bodies, Mr Jinapor said it was necessary to engage them so they could transform the minds and hearts of Ghanaians to fight against the menace.

“We are going to work together because we need strong moral authoritative voices to be able to transform the minds and hearts of our people, so we can be able to resolve this matter of illegal small-scale mining,” he stressed.

The Minister said the meeting would spearhead continuous, “moral and authoritative advocacy” from religious bodies.

“They have been to the ‘galamsey’ sites, they have prayed, spoken about it and even declared prayer and fasting and all of these are very important because in this matter, you also have to get to the hearts of people and have to get to those who can do that, and I believe the Christian bodies are very much able,” he said.

The Right Reverend Professor Joseph Obiri Yeboah Mante, Chairman of the Christian Council of Ghana, reiterated the commitment of the Council and other ecumenical bodies to tackle the ‘galamsey’ menace.

He said the representatives of the various Christian organisations and the Minister would use their platforms to preach against the menace and hold government accountable.

“We pledge to work harder on the hearts of men and women in this country, even as Government also sits up to do its part to ensure that laws are enforced… We will also collaborate with them and use our voices from the pulpits to teach and preach against this serious menace.”

The closed-door meeting had representatives from the Ghana Pentecostal and Charismatic Council (CPCC) and the Catholic Bishops Conference.

The Christian Council, last week, called on the Government to ban all small-scale mining with immediate effect after visiting some mining sites to observe the impact caused to water bodies and forest reserves. 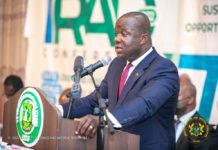 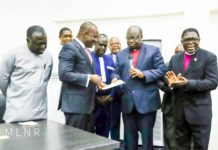