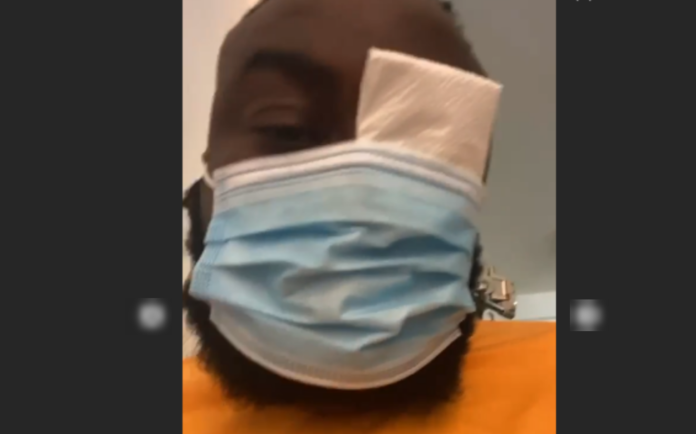 Ghanaians woke up to news that Stonebwoy has assaulted Sarkodie’s manager, Angelo, popularly known as Angel Town, after they met at a rehearsal ahead of Sarkodie’s virtual concert.

Pictures of an injured Angelo with plaster on his face raised a lot of controversies about the character of Stonebwoy, but a member of his camp has placed him far from the incident.

Chief Abiola explained Stonebwoy did not lift a finger on Angelo, but an ignorant bodyguard of theirs pushed him to the ground.

He added the ‘simple misunderstanding’ was caused by some comments Angelo made after Stonebwoy and his team drove off when they were informed of technical issues.

According to Abiola, when Stonebwoy inquired on the delay, Angelo blamed him and his people for “changing the vibe”, and that comment spark some anger in Stonebwoy.

“Stone was in a hospital at Volta to check his back but because of the rehearsal he had to forgo treatment and be present. When we got there, they told us there were challenges with lighting and sound so we left to a park where we spent time for over 2-3 hours.

“When we came back, Stone was complaining about certain things which went on at the backstage and one of the guys who noticed his boss was angry pushed Angelo and in the course, he was hurt in the face.”

However, former manager of Stonebwoy also commenting on the issue alleged Stonebwoy, ‘in his anger mistakenly’ hit Angelo in his face.