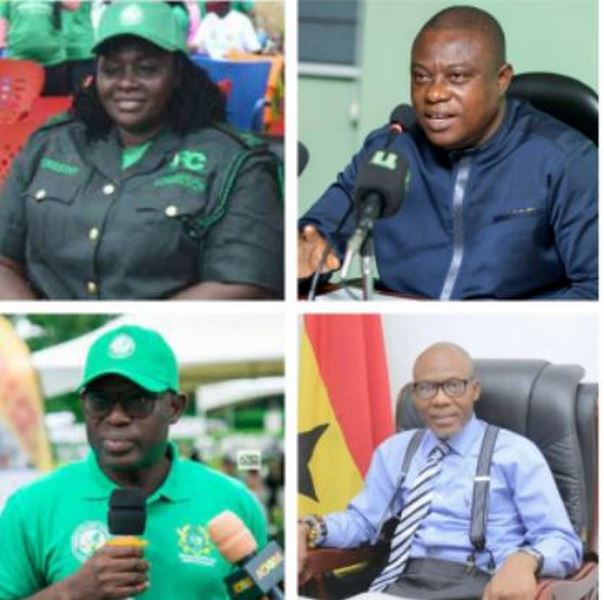 The then Minister of Lands and Natural Resources, Kwaku Asomah-Cheremeh, on Monday August 25, 2020, swore John Allotey into office as the new Chief Executive Officer (CEO) of the Forestry Commission.

That office comes with a number of responsibilities including a constitutional demand on its occupant to declare his or her assets and liabilities.

However, The Fourth Estate has found that Mr Allotey, has not fulfilled that legal obligation.

Mr. Allotey replaced the late Kwadwo Owusu Afriyie as the Chief Executive of the Forestry Commission.

Mr Afriyie, popularly known as Sir John, died on July 1, 2020. Two months later, his deputy was elevated to the position of chief executive on August 25, 2020.

Coincidentally, Mr Allotey co-witnessed Sir John’s controversial will in which he gifted plots of land in the Achimota Forest and the Sakumono Ramsar site and more than 70 other properties to his children and other relatives.

The Fourth Estate revealed that Sir John did not declare his assets, and his successor and his deputies appear to have taken a cue from him.

When Mr Allotey assumed office in 2017, Ghana’s asset declaration laws—Article 286 and Act 550—required that he declares all his assets and liabilities within six months.

He was to declare all assets relating to the following:

(a)lands, houses and buildings;
(b) farms;
(c) concessions;
(d) trust or family property in respect of which the officer has beneficial interest;
(e) vehicles, plant and machinery, fishing boats, trawlers, generating plants;
(f) business interests;
(g) securities and bank balances;
(h) bonds and treasury bills;
(i) jewellery of the value of ¢5 million [now ¢500] or above; objects of art of the value of ¢5 million or above;
(j) life and other insurance policies;
(k) such other properties as are specified on the declaration form.

However, through a right to information (RTI) request to the Audit Service, The Fourth Estate has found that just like his late boss, Mr Allotey failed to adhere to the law as of May 22, 2017.

He is not the only one.

None of his three deputies – Martha Kwayie Manu, Nyadia Sulemana Nelson and Musah Iddrisu (Musah Superior) – have complied with the law.

For the first time since its establishment in 1999, the Forestry Commission has three deputy chief executives on its payroll.

The commission is responsible for the regulation of utilisation of forest and wildlife resources.

This puts the trio in charge of the country’s 266 forest and game reserves and six Ramsar sites.

When The Fourth Estate contacted Mr Allotey, he said he had earlier declared his asset but could not remember the exact date.

He, however, said he had recently picked the form and would fulfill the constitutional obligation.

Martha Kwayie Manu, the immediate past District Chief Executive (DCE) of Juaboso in the Western North Region, was appointed deputy chief executive of the Forestry Commission in April 2021.

“They [Audit Service] should check their records well. I have done this four years ago, so they should check or I have to do it yearly?”

When The Fourth Estate asked whether she had the receipt of the declaration and whether she did it in Accra or in the Western North Region, she did not respond.

In November 2021, Mr Musah Iddrisu took to social media to announce his appointment as a deputy chief executive of the commission. Before that appointment, he had spent four years in office as the Metropolitan Chief Executive of Tamale.

There was no trace of him declaring his assets there. He didn’t respond to calls and text and WhatsApp messages on June 13 and June 14, 2022.

Although President Nana Akufo-Addo has in the past touted his appointees’ adherence to the asset declaration law, some of them did not walk his talk.

While 27 ministers and deputy ministers in his first and second term never declared their assets, 92 others including Vice President Dr Mahamudu Bawumia, the finance minister, Ken Ofori-Atta; parliamentary affairs minister, Osei Kyei-Mensah-Bonsu, and former senior minister, Yaw Osafo-Maafo, did not fully comply with the law.

In other democracies, assets declared are published. President Barack Obama, for instance, reported an income of $5.5 million in 2009 on his tax returns, most of it from his books, “Dreams from My Father” and “Audacity of Hope”.

According to White House financial disclosure forms, the Obama family declared assets of $7.7 million, not including the family home in Chicago. But they did include the family dog, Bo, which was valued at $1,600, and filed under “gifts, reimbursements and travel expenses.”

In Ghana, anti-corruption advocates, including OccupyGhana want the six months grace period in Act 550 removed from a new Conduct of Public Officers Bill, which is before the cabinet.

It said the six months provides a possible window of opportunity for public office holders who do not declare their assets immediately they assume office to acquire possessions.

“This is possible because although the Constitution categorically demands that persons being appointed to public office ‘shall’ declare their assets ‘before taking office.’ In 1998, politicians from all the political parties in Parliament, conspired to breach this constitutional provision by passing a law (Act 550) that allows the declaration to be filed up to 6 months ‘after’ taking office,” OccupyGhana said in a press statement in May 2022

It went on: “The effect of this travesty is that for more than two decades, once people assume public office without first declaring assets and liabilities, they either do not declare at all, or sometimes engage in ‘assumptive declarations’ by declaring what they do not have, in the expectation that they might, while in office, acquire the assets or make sham payments in purported satisfaction of sham debts declared.”