Pressure group OccupyGhana has condemned the complete disregard for public safety during the burial of the former Chief Executive of the Forestry Commission of Ghana, Kwadwo Owusu Afriyie, popularly known as Sir John.

In a statement, the group observed that numerous politicians, including members of the governing New Patriotic Party were at the funeral and flouted the Imposition of Restrictions Act, 2020 (Act 1012) which prohibits mass gathering amidst the Covid-19 pandemic.

Thus, Occupy Ghana questioned government’s moral right in implementing the law, when it is going contrary to that very rule.

Citing the issue of Christ Embassy’s ‘Pneumatica Night’ where thousands massed up at a single location for which organisers of the event are being prosecuted, the group said government cannot be discriminatory in imposing the rules governing the country.

“We cannot show such a remarkable sense of recklessness and abandon in these times and not expect to reap disastrous and possibly deadly consequences. This disregard of the law will embolden several people to treat Covid-19 protocols with disdain and contempt,” the statement read.

Occupy Ghana also referred government to the “weak” reason the Ghana Police Service capitalised on to prevent the #FixTheCountry campaigners from carrying out their planned demonstration in May.

According to the group, “we do not think that what happened did justice to the memory of a man who was reputed to be a man of discipline.”

Whilst extending its condolences to the family of the late Sir John, Occupy Ghana stressed that the dire effects of Covid-19 should not be forgotten.

OccupyGhana®️ has watched with consternation news reports, videos and photographs of the funeral and burial of New Patriotic Party politician and former Chief Executive of the Forestry Commission of Ghana, Mr. Kwadwo Owusu Afriyie, which event packed thousands of politicians, well-wishers and mourners into a park, with minimal mask wearing, absolutely no social distancing and a wanton disregard for the funeral restrictions imposed by government. We do not think that what happened did justice to the memory of a man who was reputed to be a man of discipline.

In our press release of 2 May 2021 regarding the holding of the Christ Embassy religious event at the Fantasy Dome, we thought no reminders were needed that the dangerous and deadly COVID-19 was still present and active among us. In that release, we hailed government’s imposition of protocols by law, which we believe demand compliance, by all. To wake up to contrary behaviour by prominent members of the same government and other politicians, after we have seen the colossal human disaster that has unfolded in India, caused by unrestrained political activities and religious events that did not respect COVID-19 protocols, is both disappointing and frightening.

We cannot show such a remarkable sense of recklessness and abandon in these times and not expect to reap disastrous and possibly deadly consequences. We need no reminders that by exercising bad judgment in releasing Aisha Huang, government created a defiant galamsey population on its hands and more destruction of our water bodies and forests ensued until it had to resort to the illegal and populist remedy of burning excavators to try and stem the tide of evil genie unleashed with the release of Aisha Huang. Similarly, this disregard of the law will embolden several people to treat COVID-19 protocols with disdain and contempt.

We saw and read about the police charging the people who organised the Christ Embassy event with offences under the Imposition of Restrictions Act. We have seen the Police resort to court injunctions and threats of force to stop the planned #fixGhana protests and demonstrations, with the weak excuse that they will defy the same Act. We hasten to ask whether the government has any moral authority now where these matters are concerned?

While extending to Sir John and his family all the deserving courtesies, respect and condolences, the irony is not lost on us that due to COVID-19, a British Royal and Duke had only 30 people in attendance at his funeral. The whole world witnessed it, and we thought much lessons could have been gleaned from that utterly humane event around a person of global stature.

This behaviour of people in a position to know better is deeply worrying, and while we can only pray that it doesn’t happen, if in weeks this event turns out to be a super spreader event with more deaths and hospitalisations, government will have no one but itself to blame for its inability and unwillingness to show a better example.

We repeat our oft-repeated call on all Ghanaians to keep respecting the COVID-19 protocols in all situations. We must protect ourselves and our loved ones, even when people who should know better break the law while enforcing it against others. 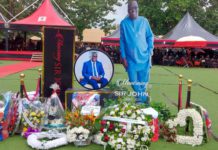