A former aide to the late Chief Executive Officer of the Forestry Commission, Sir John, has been ordained as a man of God.

Charles Owusu was ordained by Reverend Isaac Owusu Bempah, the Founder and Leader of the Glorious Word Power Ministries International.

The politician and social activist and two other pastors were ordained with him for their exemplary leadership qualities.

Anointing them with oil, Reverend Owusu Bempah empowered them with the word of God and hoped that their ministries would be blessed with fruit of souls.

Mr Owusu, now Pastor Charles Owusu, was until his elevation to priesthood a staff of Ghana Forestry Commission.

With a wide background in political activism, Mr Owusu’s emergence into the field of religious work promises to set him off on a new career. 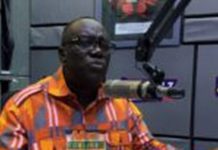