The Electoral Commission (EC), has said it cannot be blamed for the violence that resulted in the death of some persons in the 2020 elections.

The EC has been massively criticized for supervising an election that led to the death of some five persons with others seriously injured.

But to the Chairperson, Jean Mensa said even though they believe lives must not be lost during elections, security was not part of their job.

“An exceedingly disturbing challenge is the violence which led to the death of citizens of our country. And, we say never again. Never again should we go to an election and have anybody lose their lives. Here also, there is a tendency for fingers to be pointed at the EC when security is not the core mandate of the EC.

“I have read the constitution and security is not part of our core mandate. I use this occasion to clarify that the EC is not responsible for election security, although the entire election and its success rest on the shoulders of the Commission. Our mandate as entrenched in the Constitution does not include security,” she said.

She urged the police to speed up investigations into the killings to deliver justice to the affected.

“I take this opportunity to call upon the Police Service and the National Elections Task Force to speed up their investigations and bring the culprits to book.

“The families of the victims, the citizens of Ghana, and the international community are waiting for justice to be done,” she appealed. 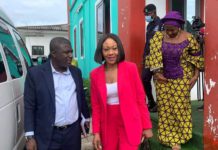