Member of Parliament (MP) for Ningo-Prampram, Sam George, says the groups that have sent documents to Parliament’s Committee on Constitutional, Legal and Parliamentary Affairs making a case against the proposed Anti LGBTQ+ bill cannot override the desire of the majority.

According to him, majority of Ghanaians do not want to tolerate same-sex relationships or people with different sexual orientations.

This, Mr George said on The Pulse on JoyNews, is contained in an afrobarometer survey conducted by CDD-Ghana of which some of the members opposing the Anti LGBTQ+ bill are part.

He stated that: “If you go to page seven of that report, social tolerance in Ghana is extremely high. Ghanaians are tolerant of different ethnicities by 92%, different religions by 91%, different political parties by 90%, different immigrant and foreign workers by 74%, but these same Ghanaians are only 7% tolerant of homosexuals. It tells you what the people of Ghana want.”

The Ningo-Prampram MP stated that the report also revealed that Ghana is fourth on the continent, behind Senegal, Liberia, and Malawi, when it comes to intolerance towards people of different sexual identities and orientations.

“We are not ready to tolerate it, that is who we are, our people say they don’t want it. These personalities do not hold the torch, whatsoever, to the strength of the collective will of the majority of Ghanaians and their personal agendas will not override the desire of the majority of the people,” he told Ayisha Ibrahim, the host of the show.

His comment was in reaction to the two separate documents that have been sent to Parliament’s Committee on Constitutional, Legal, and Parliamentary Affairs making a case against the proposed Promotion of Proper Human Sexual Rights and Ghanaian Family Values Bill, 2021.

The bill has been tagged as anti LGBT but its promoters, led by Mr George, say it is in the interest of the nation that an appropriate legal framework makes advocacy for Lesbian, Gay, Bisexual, and Transgender rights illegal.

However, the Human Rights Coalition says the Bill is in direct conflict with a number of constitutionally protected fundamental freedoms and human rights.

Again, the Coalition argues that the provisions of the Bill are incompatible with a number of international human rights instruments to which Ghana is a State Party.

The other coalition, led by Private Legal Practitioner, Akoto Ampaw, argues that the bill criminalises dissenting views and expressions contrary to the words ‘freedom and justice’ that emblazon the coat of arms.

Thus “the Bill ought, with respect, to be firmly rejected by the Parliamentary Select Committee on Constitutional, Legal and Parliamentary Affairs, and by Parliament as a whole.”

However, Mr George believes that these documents have no academic value, neither do the petitioners understand the Anti LGBTQ+ bill put before parliament.

“They say if the bill is passed into law you cannot have this kind of conversation, that is incorrect and uninformed. What the bill criminalises is the advocacy for and promotion of LGBTQ,” he said. 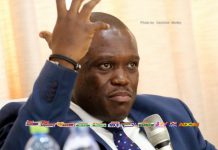