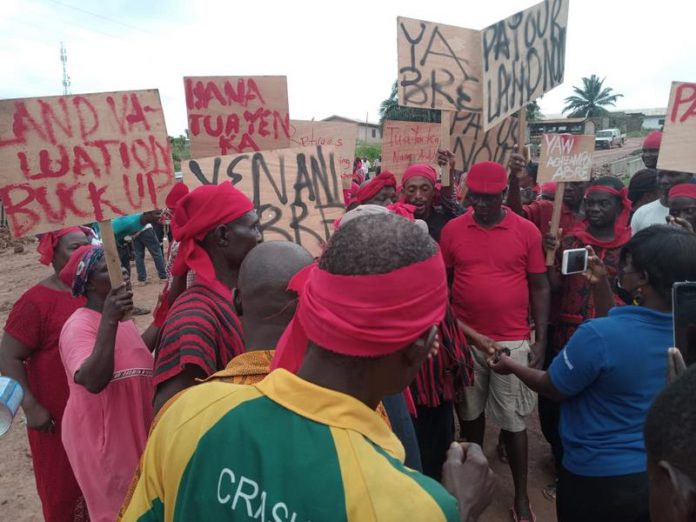 Some residents and landowners of Akrade and Senchi displaced by the construction of the Mpakadam-Tema rail project have hit the streets at Asuogyaman to demand for compensation from government.

The affected residents say failure by government through the Railway Development Authority to pay compensation for the  destruction of their buildings and farms has negatively affected their livelihoods.

They want government to adhere to modalities agreed to pay them off for the use of their lands for the construction.

Leader of the group, Nana Osae Afari, said ” Since our lands were acquired by EI 23 of 2019 for the construction of the Tema-Mpakadan Railway line project, we had no option but to clear from our land for this important national project. A year later in August and September’s 2020, our crops and building structures were valued and paid with the exception of two structures whose owners rejected the claims and also two crops farms whose owners also rejected the valuation.”

According to him, government failed to pay for their lands despite several demands from the Land Valuation division of the Lands Commission.

” In April 2021, Akrade claimants were given offer letters expecting payments to be effected soon thereafter. On 11th June 2021, there was a Community Engagement with claimants from Akrade and Senchi as well as the chiefs and the paramount chief of the Akwamu traditional area, Odeheno Kwafo Akoto 111 and the deputy minister of railways development, the regional minister. They assured us of paying our claims early but we have not heard from them again,” he explained

The protestors, clad in red bands, amidst brass band music marched from Akrade to Atimpoku where they presented a petition to the Asuogyam district chief executive, Samuel Kwame Agyekum.

Some of the placards with the inscription ” Nana Tua Y3n ka, Yaw Acheampong Abr3, pay us now, Nana why” among several claims were to express their displeasure at the turn of events.

In the petition, they issued a 21-day ultimatum to government to honour its part of the agreement to forestall further protests.

The construction of the 97.6-kilometre rail line has witnessed several setbacks including the emergence of COVID-19 but government hopes to complete it by the end of this year.