On June 4, 1979, Ghana was ushered into its morning life with an announcement on radio by Flight Lieutenant Jerry Rawlings of a change in government by the Armed Forces Revolutionary Council (AFRC). The June 4th Revolution, otherwise known as June 4th Uprising, arose out of corruption, bad governance and frustration among the general public.

General I. K. Acheampong led a group of disgruntled army officers and usurped Prime Minister Dr Kofi Abrefa Busia’s government in 1972, and formed a government which they called The Supreme Military Council (SMC).

However, in 1978, General Acheampong was accused of economic mismanagement and forced to resign by a group of army officers led by General Akuffo.

On May 15, 1979, less than five weeks before the national elections, the then- Flt. Lt Jerry John Rawlings led a group of junior Ghanaian army officers in an attempted overthrow of the military government of General Fred Akuffo and the Supreme Military Council.

He was then arrested and imprisoned after he led a group of junior Ghanaian army officers in an attempted coup d’état against the military government led by General Fred Akuffo.

On the night of June 3, 1979, a group of junior officers including Major Boakye Djan and enlisted personnel of the Fifth Battalion and the Reconnaissance Regiment in Burma Camp staged a bloody coup and freed Rawlings.

An announcement was made early in the morning of June 4, 1979 at 6 a.m. on Radio Ghana of a change of government.

The voice which made the announcement later at 7.30 a.m. identified itself as that of Flight Lieutenant Jerry Rawlings who was expected in the morning to appear before a court martial at the Burma Camp.

He declared that he and some other ranks had taken over the Government and asked officers and men to report to Nicholson Stadium inside Burma Camp where election of officers would take place.

He invited all officers who knew they had nothing to fear to attend the meeting.

Barely an hour and half later, Major- General N. A. odartey-Wellington, Army Commander, announced on the air that an uprising which occurred in the early hours had been quelled.

He then invited Flight Lieutenant Jerry Rawlings and his supporters to meet him at the First Infantry Brigade headquarters at Kpeahie Ridge and promised there would be no arrests and victimization.

The lull which followed this announcement was, however, broken at 3.32 p.m. when a special Radio Ghana announcement said that Flight-Lieutenant Rawlings and his men had taken over control of the country.

Notable on the day was a display by Major- General N. A. odartey-Wellington. He entered an armoured car and single-handedly shot for three continuous hours. When he ran out of cartridges, he dashed to the Nima Police Station to surrender.

Unfortunately, he was killed on the spot by military officers immediately he came out of the armoured truck.

That incident marked the beginning of the uprising.

After the incident, all military installations were searched and senior military officers who were on the side of the Supreme Military Council (SMC II) were killed. It was on the same day that Col. Aninful, the president of the military tribunal that tried Rawlings and the junior officers on 15th May was killed. His wife and children, who were also in the same room, were shot. Many sympathisers of the previous government fled the country to seek asylum elsewhere.

The membership was as follows;

Though June 4 or the June 4th Revolution, otherwise known as June 4th Uprising, became a noted date in Ghana’s history, it has been said to be a date that brings a lot of pain to people who either lost loved ones, lost businesses or had to flee the country for their dear lives. 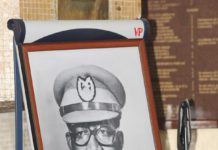