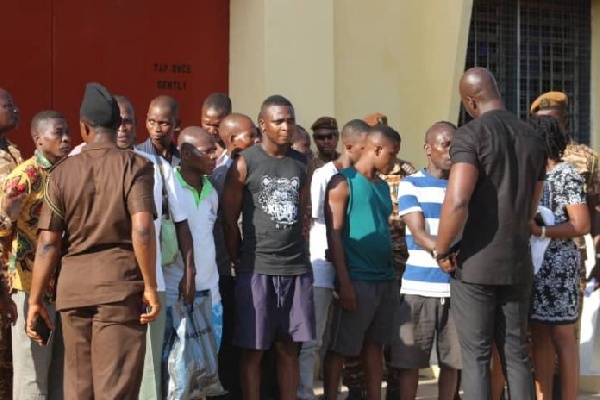 Most crimes being perpetrated by convicts in prison happens at the blindside of prison officers, Assistant Chief Prison Officer (Rtd), Paul Samuel Baba, has claimed.

As a result, Mr Baba said, prison officers cannot be said to be complicit in crimes at various correctional centres in the country.

His comment follows revelations made by an ex-convict, Daniel Ofori, who served 10 years in Nsawam prison for drug-related offences.

Ofori alleged, among others, that the inmates engage in fraud and homosexuality with prison officers turning blind eyes to the vices.

“I hide cigarettes and ‘wee’ in my anus into the prison and the officers collect their share after I have made my sales,” Daniel claimed in an interview he granted local television station, UTV.

Reacting to the allegations, however, Mr Baba said the story shared by the ex-convict will remain hearsay until there is substantial prove.

“When I was in active service, I also heard such tales but never caught any of the inmates engaging in such illegality,” he stated.

This notwithstanding, the former prison officer confirmed that inmates engage in fraud, homosexuality and other social vices that happen in other prisons across the country.

He, however, mounted a spirited defense of the Ghana Prison Service wit respect to the allegations by the ex-convict.

He said the prison officers are not complicit since most of the activities happen on their blind side, conceding, however, that most of the prisoners are able to smuggle contraband goods into their cells.