Former Deputy Minister of Power under the Mahama administration, John Jinapor, has said he played no frontal role on negotiations that led to Ghana’s purchase of a power plant in 2015.

Mr Jinapor has however confirmed that he had appeared before an investigative body concerning the alleged bribery.

According to him, the then Power Minister, Kwabena Donkor was the government’s representative on major discussions on the project.

His comment follows a report from the United States of America’s Securities and Exchange Commission which indicts some former government officials and legislators.

The reports say the officials were influenced with bribes totalling $4.5million by intermediaries of a Turkish energy company in a bid to land a power deal with the Ghana government.

Speaking in an interview on Asempa FM’s Ekosii Sen, Mr Jinapor said even though he was a Deputy Power Minister at the time the alleged bribery occured, he was not directly involved in any negotiations.

“As a deputy minister, I act on the instructions of a minister and was not assigned to this deal so I cannot be directly involved in this AKSA bribery scandal. I have appeared before an investigative body on this AKSA issue but said what I knew,” he said.

He added he is clear in his conscience on the AKSA bribery scandal and ready to appear before any investigative body.

Meanwhile, the report also fingered the Managing Director of the Tema Oil Refinery (TOR), Mr Asante Berko who is said to have facilitated the payment of the bribes.

John Jinapor supports tertiary students in his constituency with GHC200K 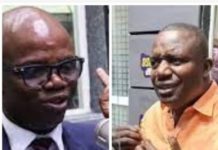