“Growing up, I believed I could sing and led ministrations at Berekum Presby where I fellowshipped but never thought I’ll build a career out of it.”

These were the words of celebrated police officer and musician, Chief Superintendent Kofi Sarpong as he opens up on his two professions.

According to him, the journey began after his enlistment into the Ghana Police Depot in Koforidua.

As newbies yet to go through training, they knew little about each other but there was the need for leaders to be appointed among them.

“The day for us to commence our training finally came and we boarded a bus to Koforidua.

“On our way, a colleague whose name was first on the list looked me in the eyes and told me I’ll be the chaplain, a role I couldn’t fathom why it was bestowed on me but I accepted in good faith,” He told Afia Amankwa Tamakloe on M’ashyase3 show.

However, things, he said, didn’t go as expected since most of the recruits went to town to fellowship in their various churches.

But that didn’t deter him from continuous mobilisation and evangelism to get more people into the camp service.

In what he described as a major turnaround, he ministered one Sunday during which there were numerous testimonies, causing the people present to spread the news which drew even some wives of personnel into the church.

Fast forward, he passed out of the training school but that did not end his ministrations which he took to a different dimension.

After a performance during a church service that had his now manager, Akwasi Ernest present, Chief Supt Sarpong said the latter made him an offer.

He was, however, reluctant and did not heed since he thought it wasn’t possible for a policeman to take up another job.

Following consultations with a former Director of Police Welfare, Mohammed Alhassan, he wrote a letter to the then Inspector-General of Police, Paul Quaye about it but the former read through it first.

“Just after I handed him the letter, he told me I have waited for this for so long and it’s finally here. That was a great sigh of relief and I immediately placed a call to Akwasi Ernest who I have worked with all these years,” he recounted.

He explained he has no regrets about making that choice as it has helped to impact many lives.

The top policeman also acknowledged Akwaboah, Joyce Blessing, OJ among others who he revealed have been instrumental in his career. 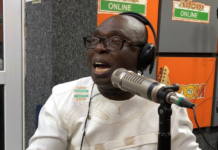 I dropped out of school thrice – Chief Supt Kofi Sarpong